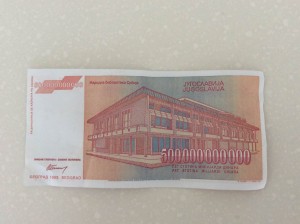 Djelko starts his free walking tour atop a park bench beside a busy street in Belgrade. Behind him, expensive cars speed noisily by. Overhead, the sky is blue, cloudless.

The young Serb is lanky, thin faced and bespectacled.

He wears sneakers, baggy jeans and a green t-shirt that says ‘Save the Earth – it’s the only place with plums’.

Oh, and he used to be a billionaire.

He says, “I know what you’re thinking. Why is a former billionaire giving free walking tours of Belgrade? It makes no sense.”

A man from the tightly-packed crowd of tourists yells out, “You invested in Greece”. (Laughter).

The truth, though, is even more outrageous.

Between October 1993 and February 1995, Yugoslavia – the nation Serbia was part of – experienced one of the worst episodes of hyperinflation in history.

“Which is like adding 15 zeroes to the price tag on your milk and bread.”

In response to rising prices, and after several failed attempts at containment, the Communist Party created a new currency unit. They made one ‘new’ dinar equal to one million ‘old’ dinars.

“Rather than fixing the problem, the government made it worse,” Djelko says. Inflation kept rising. And it got so bad that the average daily rate of inflation ended up higher than 90 percent.”

With daily inflation so high, it became necessary to spend all your money as soon as you got it.

Djelko remembers his parents getting their salary and then rushing out the door to buy things for their family.

He says, “If you waited just one day, your money lost all its value and you couldn’t buy the things you needed.”

Before we move to our second stop, Djelko makes this analogy.

Imagine your bank account – in it is the money you’ve worked your whole life for. It’s money for your family. Your child’s school. Your sick mother’s medication.

See that number. Now shift the decimal point 22 places to the left.

I wonder what stop two will bring…