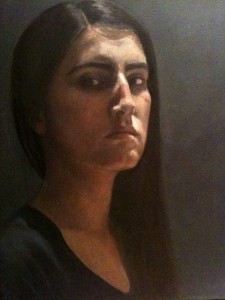 Winning an Archibald prize is a dream of young artist who made her mark at 2015’s Adelaide Fringe Festival of the Arts.

The very articulate and softly-spoken Tsering Hannaford, 27, whose ultimate goal is to develop a reputation and career in portraiture, has been working as a full-time professional artist since 2013.

“I guess I have always been producing artwork – always drawing, painting, in art classes, at school etc. The decision to paint full-time was more a shift in how I viewed and valued what I could do already,” she said.

With strong encouragement by those around her, Tsering (her name is of Tibetan origin – meaning ‘long life’) made the transition in 2013 from a hobbyist to professional artist. This was a very challenging time in her life.

Growing up between Adelaide and Riverton – a town in the mid-north region of South Australia – Tsering would spend hours amusing herself with her creative yet overactive imagination.

“I was adept at entertaining myself, and I would do this mainly through day dreaming, making things, reading and drawing- princesses, monsters, characters from books, and everything in between,” she said.

Daughter of artist Robert Hannaford who is best known for his portraiture, Tsering was encouraged and nurtured from a young age to pursue a career in painting. (Hannaford was Archibald prize people’s choice winner in 1991, 1996 and 1998.)

Robert said that as a child Tsering loved to draw – it was something that occupied her for hours at a time.

“We went overseas to Kenya when Tsering was only three years old, and I remember it very well because she just drew all the time.

“She was already drawing figures – you know most kids draw sort of stick figures, but she had them all full of limbs, and they were monsters and all imaginative things.

They were really amazing drawings, I’ve still got them.”

Hannaford said despite her obvious talent, his daughter did not make an early decision to make art her career.

“She often used to do self portraits even a young child from about 10 on, and they used to amaze me, but she didn’t talk of becoming an artist until after she left school, and after she got her degree.”

Visual artist Megan O’Hara, winner of the 2004 Waterhouse Natural History Art Prize 2004, said Tsering had developed her own style within a rich environment:

“Tsering’s artworks show the evidence of years of being inspired and educated in a rich artistic environment, which gives her the confidence and substance of becoming a great painter,” she said.

“Her painting style is her own, as she approaches painting with a feminine sensitivity to her brushstrokes and subject matter.”

Tsering received a merit award for Visual Art studies in year 12, but initially pursued other interests after school.

“I wanted to challenge myself and explore all my options, so I began a double degree in Arts and Science at the University of Adelaide,” she said.

She graduated with an Arts degree in psychology, and then returned to finish a graduate Diploma in Art History at The University of Adelaide.

Tsering volunteered at Artlab Australia for two years, where she was encouraged by the head of the painting department to explore a career in painting.

In her father’s footsteps, she has gone on to receive many accolades of her own – highly commended for the Portia Geach Memorial Award in 2014, winner of Emerging Artist Award for the Royal South Australian Society of Arts Inaugural Portrait Award in 2013, winner of the Eran Svigos Award for Best Visual Art at Adelaide Fringe 2014, and winner of the Malcolm Campbell Award for Drawing at Youthspace in 2010.

In addition she has been a finalist in Salon des Rufuses, A.M.E Bale Travelling Scholarship and Art Prize, Kennedy Prize and semi-finalist in the Doug Moran National Portrait Prize.

Over the Fringe period, Tsering has had works on display at the Royal South Australian Society of Arts, Floating Goose Studios and Adelaide College of the Arts Gallery.

Tsering says that being able to inspire others to follow their interests in art or painting is her greatest achievement thus far.

“I have held a few workshops and painting demonstrations at the Art Gallery of South Australia and the Royal South Australian Society of Arts, and this has been very rewarding,” she said.

Her father has always encouraged her. He said: “My contribution to her if you can put it that way is just to encourage her to keep working from life and not photographs, as I did when I was her age.

“I try to encourage her to work as her own master, and work from nature and to get the basic knowledge of light and form and anatomy.”

Tsering is soon to be starting some new still life paintings for SALA (The South Australian Living Artist Festival), to begin in August this year.

She has also begun a new body of portrait work due for exhibition in 2016.