Swinging into bliss at Wongi 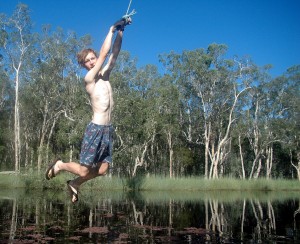 Supported from a rather fragile-looking euclupt hangs a rope from which adults and kids alike swing into the refreshing cool water of Wongi Waterhole.

The deep waterhole is in a peaceful setting as campers hang their towels from the rustic wooden rails and day-tripping families spread picnics on tables and grass.

A 25km drive from Maryborough, Wongi State Forest has abundant birdlife and at nearby Lake Lenthall you can paddle extensively or drop in a line and catch a barra.

Bring your canoe and fishing line because the large Lake Lenthall, 10km from the campsite, is stocked with an abundance of fish including bass, barramundi (yes this is the southernmost lake where you can catch a wild one!), yellowbelly and silver perch.

There are reports of Saratoga being caught here as well. If you just want to paddle, the lake is vast, so pack a picnic. There is a large parking area and a concrete boat ramp.

We camped in the state forest park. The ground is relatively flat and there is a lot of space in the free-camping area. On a short walk from our tents were spotted bird species including the grey crowned babbler, azure kingfisher, brown honeyeater, noisy friar bird and rainbow bee eater.

The large campsite has toilets and running (but not drinkable) water. Goannas cruise the campsite by day and climb trees while treefrogs hop about at night. Fires are not permitted.

There is lots to do besides swimming, walking or lazing in a hammock. Some families bring pushbikes – the dirt roads are relatively flat and there are a few loop roads. Some bring dirt bikes.

A permit is needed to camp and another to fish Lake Lenthall. The Ranger’s Office ask you to report what you catch as they keep a record of what goes in and what comes out of the lake. For boaties there is a speed limit of 6 knots, no wash, no skiing and no swimming (blue-green algae). The lake is gated and open from 6am to 4pm.