Accident survivor couldn’t bear to look in the mirror 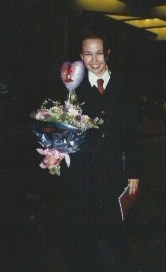 Ellen a year after the accident

It was 1995 and Ellen Harper was out with a friend. They were having a coffee at Surfers Paradise on the Gold Coast. Ellen knows now she never should have driven home.

On her way to Tallebudgera Valley the 18-year-old began to feel tired, so she wound down her window. Just under a kilometre from home she wound her window up, deciding she would be fine to drive the rest of the way. She wasn’t.

She drove head on into a tree on the corner of her property. Her father was home but their house was too far away on their 10 acre block. No one heard a thing.

When Ellen came to she was scared and nauseous. She threw up a few times and was in and out of consciousness. An hour later a man coming off nightshift spotted her car.

“After seeing me in the car he went down the road to a local doctor who knew everyone – she came up but didn’t recognise me at all.” The doctor finally realised who she was and went up the driveway to tell her father, a local policeman.

To this day Ellen’s father cannot talk about the accident without becoming emotional. She can only wonder what went through his head when he arrived at the scene.

Especially as he knew Ellen had been a teenage passenger in two horrific accidents.

Five years earlier her mother was driving a minivan back to the car rental base. Ellen, 13, and her friend were sitting in their seats, dancing and fooling around – without their seatbelts on – when a car ran a red light and flipped the minivan. It actually flipped over two and a half times. Ellen’s friend flew out the window. Ellen, somehow, remained in the van. She couldn’t get out as the window was too high. When the minivan landed it missed Ellen’s friend by a fraction She had landed on the road and was surrounded by a lot of her own blood. Ellen thought her friend was dead – luckily she survived but had broken both her arms and her legs. It took her friend two years to recover.

Two years later Ellen’s father was driving when a truck cut him off. He had two choices – either drive under the truck and risk decapitation or drive head on into a brick wall. He chose the brick wall. It saved his and Ellen’s life. Ellen, 15, was pushed forward and her knees went through the dashboard. She went into shock and doesn’t remember much about what happened. She was physically unharmed. The truck driver was convicted of negligent driving.

And now, at 18, she is in a crumpled car that has ploughed into a tree. Ellen still wonders why, but they couldn’t get her out of the car. She had to wait until police arrived to cut her out of the car. She was still unconscious. Later her father told her it was better she was not conscious, when he was standing by the car he had lost count of how many snakes he saw sliding over his boots. When Ellen hit the tree her seat belt broke on impact and her face hit the steering wheel. She hit it with such force that the steering wheel warped into the shape of an oval.

She doesn’t remember being cut out of the car. She was taken to the Gold Coast hospital where they concluded she needed a facial reconstruction.

The hospital didn’t have the resources to repair and reconstruct Ellen’s face so she was flown by helicopter to a hospital in Brisbane. They had to wait for the swelling to go down before they could attempt any kind of surgery.

She wasn’t allowed out of bed as they did not want her to see her face. She insisted on looking anyway, so one day when the nurse left the room she got up and looked in the mirror.

As Ellen remembered this moment her eyes swelled with tears. She did not recognise the face staring back at her. That first week Ellen spent in the hospital is a very hazy memory for her. She doesn’t remember much but she remembers very clearly how she felt when she looked into that mirror.

Her grandmother came to the hospital and washed the blood off off her face and brushed her hair.

Ellen said her grandmother was more like a second mother to her. They were very close, right up to the day she died last year. “When she died it was as though a large piece of me was taken with her. I am better now, but for a long time she was the only person that accepted me for me.”

Ellen had broken her cheek, her nose and her jaw. It all had to be reconstructed near her eye socket. Now when she is tired her eye still droops quite low.

She stayed in the hospital for three weeks but even after she left her face hadn’t returned to normal. It took four months for the swelling to completely go down and for her face to begin to resemble someone she knew.

Even though Ellen’s face recovered the accident still affects her every day. The impact has affected her memory and therefore she has a tough time retaining information. Because of this Ellen couldn’t follow her dreams and become a police officer like her father. She studied hospitality course but couldn’t further her career. She has made the most of her life and is now happy as a store merchandiser and sales assistant for a jewellery store.

Months after leaving the hospital she had to undergo regular checkups and psych tests. The emotional and physical trauma stayed with her.

After leaving the hospital Ellen discovered she had been charged with negligent driving.

Despite what Ellen has endured and the pain she has suffered, she sees an upside in what happened to her. She hopes her experiences will affect her daughters in a positive way and make a difference in their lives.

Ellen is proud she survived her car accident. She feels lucky because she was able to recover, get married, have children and, she hopes, stop other people from injuring themselves while driving.

“I think you need to listen to yourself and when you know things aren’t quite right don’t do it. Take careful risks. For me I knew I shouldn’t have driven, I was too tired.”

Ellen has been through a lot in her life but she believes it helped shape her outlook on life. She has respect for people, respect she doesn’t see in some of the younger generation of today.

“There are people that I hope this helps, because they are self-involved. But I think those particular people are lost and instead of not caring I view it a little differently. I see them as lost and it makes me sad, it makes me believe they will go through life unsatisfied and go through more heartbreaks than you should. I am completely satisfied with my husband and my daughters and I just hope that they can learn from this. They can learn that life can be taken in an instant and they need to make the most of it.”

With all that Ellen has been through she still looks for the good in every person, for the life in people’s eyes. Ellen is a strong and magnificent woman who is hopeful that sharing her story may just change someones life.