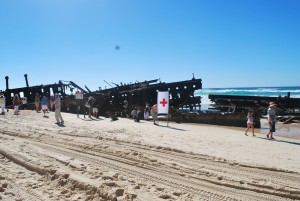 The SS Maheno wreck, a tourist attraction on Fraser Island for 80 years.

The famous wreck of New Zealand’s SS Maheno, aground on Fraser Island’s eastern beach for the past 80 years, today provided a backdrop to the celebration of a special connection between Australia and New Zealand at Gallipoli.

The ship’s bell was escorted to the island by school children from the town of Maheno in New Zealand after which the ship was named.

A crowd estimated at more 600 people attended the service on the beach alongside the Maheno wreck in brilliant sunshine.

One hundred years ago the Maheno, a once proud passenger liner, stood off Gallipoli as a hospital ship treating and transporting Australian and New Zealand casualties.

A former passenger liner, the Maheno washed on to the beach during a rare winter cyclone in 1935 while it was being towed to Japan for scrap.

Organiser Russell Postle from the Rotary Club of Brisbane High Rise said there were many uncanny coincidences linking the town of Maheno with Fraser Island. 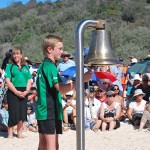 One of the school children from the Maheno School rings the ship’s bell.

There was a Happy Valley Road in the town of Maheno and in the island a township of Happy Valley.

There was a place called Happy Valley at Gallipoli.

The principal of the Maheno School is Mr Ryan Fraser – he accompanied the children and their parents to Fraser Island.

“The Maheno was destined to be here,” Mr Postle said.

Service personnel from the RAAF at Amberley provided the catafalque party.