Brave journalist risks her life to tell the truth 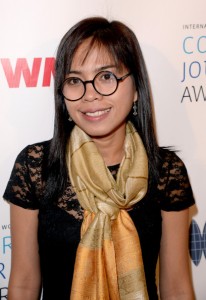 Bopha Phorn at the Courage in Journalism awards

Imagine what it is like to live in a corrupt country where the people are not free and the society illiberal. An unlucky country where people have bullets rained down on them for asking questions.

This is what is like to be a journalist in Cambodia.

A woman who stands by her notion that she should cast herself into the fiery gates of hell so others are saved from the pain.

A woman who with every penned word exposing government ineptitude sacrifices her own personal safety for the greater good of the cause: a person’s right to question; a fight for freedom of speech.

A woman honoured with the Courage in Journalism award of the International Women’s Media Foundation in Los Angeles.

Bopha reports for the Cambodia Daily, an English-language newspaper in Phnom Penh.

She has endured traumatic experiences in her determination to tell the truth to her readers.

But to get in the way of government officials opportunistically selling stolen Cambodian land and natural resources – that is crossing the line.

Two years ago Bopha and a fellow journalist together with activist Chut Wutty visited the Cardamom Mountains in Koh Kong province to photograph illegal deforestation.

Military police detained the convoy and then fired their guns.

Chut Wutty was hit but Bopha and her friend managed to jump free of the car being peppered with bullets. They hid in the surrounding forest.

Chut Wutty was killed by an officer who was then shot dead by another officer.

Rather than running, Bopha ran out into the clearing hysterically pleading: “Look at what you have done! You have even shot one of your own! Come back and help!” 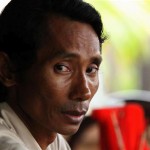 But her audience had disappeared. The aggressors had run away.

There has been no official inquiry into the death of Chut Wutty. The surviving gunman was jailed for two years.

It should have been her message to stop. While Bopha can now talk about ‘the incident’, as she calls it, to rooms packed with foreigners, it is a story that must be auto-cued in her mind. Trying to talk to Bopha in person about ‘the incident’ instead gets her talking about what she did to recover.

Looking at Bopha it is apparent that freedom fighters don’t look like this. They don’t look tiny, fragile and innocent.

She has to mask her youthful and sweet 29-year-old voice by pretending to be older over the phone. It’s something that makes her laugh.

Personal authority is an issue that Bopha encounters every day.

The first time I heard her speak about her story and being shot at in the call of duty, I just wanted to go up to her and give her a hug. I wanted to protect her.

When Bopha visits the provinces of Cambodia she is received with warmth by the people. They want, no they must, tell her their story. Land stealing by government officials is a systemic problem and one that has been legally legitimized by law written by the perpetrators.

When people are displaced from their land it represents loss of income, loss of community and loss of survival security. Without a block of land to till and nurture people have no hope of waiting out the perilous times of unemployment.

Land possession is the only ‘welfare’ system available to the Cambodian people. The instability arising from the notion of government land grabbing is counter-conducive to the entrepreneurial and capitalist spirit of the Cambodians. Why try to set up shop when you can be kicked off the land that is supposed to be yours?

The issue of illegal logging for Siamese Rosewood is closely related, with one Cambodian woman deliberating that ‘without the forest we will die’. Government officials take it upon themselves to ‘protect the forest’ through de-forestation and it was for this reason, to expose the injustice of it all, that Bopha was assigned to the story that led to Wutty’s death. 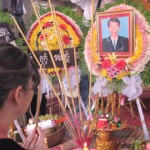 Rather than talk about her personal suffering, Bopha tells me of the time she spent in solitude in the comfort of her office writing the beginning chapters of a new book on Cambodian politics. Heavy stuff for a young lady of her age, but befitting the woman of substance who lives with intellectual purpose in her life.

When Bopha is asked whether a grass roots movement or foreign involvement will fix the government for the better, she is quick to reply that both will help. Foreign attempts to assist can already be seen in the fact that the owner, editor and several of the journalists working for the Cambodia Daily are Westerners.

Bopha is committed to the cause of liberation in Cambodia, but she knows she has to work strategically to achieve this end. She has to network and find people willing to help her. She needs to promote her cause by becoming known to the Western world.

If Bopha could change one thing about Cambodia it would be political corruption. And Bopha knows that publishing exposes of wrong-doing might end her life.