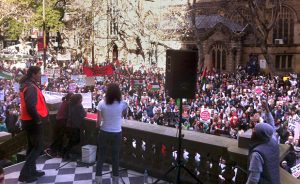 About 3000 protestors took to the streets of Sydney on Sunday to rally against Israeli bombing of Gaza.

For the third week in a row protesters gathered at the Town Hall at 1pm, where speakers addressed the crowd and led chants against Israel’s bombardment of Gaza and the Abbott government’s perceived pro-Israeli stance. More than 1000 Palestinians and 45 Israelis have died after 20 days of fighting.

After 45 minutes the protesters marched down George Street, turning right onto Park Street and regrouping in Hyde Park.

Although Sunday’s protest was smaller than the previous week’s, the mood was more intense and energetic. The crowd became emotionally charged when the names the children killed in Gaza during the latest round of fighting were read out, and recordings of Israel’s offensive played over the loud speaker.

Renai and Nadia, two girls of Lebanese descent, acted out parts in a pantomime dressed as Palestinians lying on the ground with make-up to look as if they had been shot.

Nadia held a sign which read “I’m just another number”, an act which has been mirrored throughout the world at other pro-Palestinian protests.

“I think people are becoming aware and…it’s become more normal than it was last week, so everyone’s more comfortable doing it,” Renai said.

Basel and Dalya Ayoub of Bankstown, originally from Gaza City, said they came to show support for Palestine, and their family now trapped in Gaza.

They said it was almost impossible to contact family.

Organisers told Newsbytes the protest may have attracted fewer people because it fell on the last day of the Muslim fast Ramadan.

Asked to comment on the demonstration, Ahron Shapiro of the Australia/Israel and Jewish Affairs Council said: “They have every right to protest.

“We only ask that the rhetoric that we’ve seen in this country has often walked the line between legitimate protest and hatred towards ethnic groups and we warn that’s a dangerous road to go down. We call for calm on all sides.”

He added: “Any call for a ceasefire has to include a ceasefire on the side of Hamas. It’s not a one-sided battle here”.