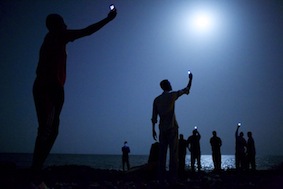 A striking image of African migrants raising their phones to catch an elusive signal took out first prize in this year’s World Press Photo contest.

The image, “Signal”, is on display at the New South Wales State Library in Sydney as part of a touring exhibition of the best photos.

The year-long exhibition, which travels to more than 100 cities worldwide, provides a stunning display of some of the more memorable and moving, as well as quirky and often forgotten about or unheard of, press events of 2013/14.

The exhibition highlights the power of photography to determine what we recall and how we judge and remember events.

Now in its 57th year, the World Press Photo Contest selected winners and finalists from more than 5000 entrants who submitted more than 90,000 images to the contest.

The photos on display range from intimate family portraits of Egyptian body-builders, natural disasters such as Typhoon Haiyan, the Syrian Civil War and even the Lingerie American Football League.

This year’s winner, John Stanmeyer, for his photograph “Signal”, said he was “humbled and honoured” to receive the prize of 10,000 Euros.

‘Signal’ was taken by Stanmeyer on the shores of Djibouti City, Djibouti, and shows African migrants raising their phones into the night sky to capture an inexpensive mobile signal from neighbouring Somalia.

“It’s an important moment in our collective humanity of not only migration, but how we are desperate to connect back home,” Stanmeyer said.

While Stanmeyer was declared the winner, there were many more who could have easily taken the prize.

“Signal” is just one of many arresting and thought-provoking images on display in the State Library’s spacious Exhibition Gallery.

At a time when traditional media organisations are struggling to come to terms with the digital age, World Press Photo 2014 gives prominence to photography over the written word.

Yes, it really seems as though one picture is worth a thousand words.