Review: X-Men: Days of Future Past 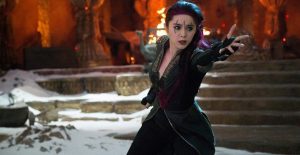 Fan Bingbing as Blink in X-Men: Days of Future Past

Comic book nerds gather round – for it is once again time to venture into the realms of society to witness Earth’s greatest heroes save the planet from sure destruction – all for a reasonable $16.99.

X-Men: Days of Future Past is the latest addition to director Bryan Singer’s seven-film saga, but despite the very real threat of franchise fatigue (Home Alone I’m looking at you) and a bit of an overload of new characters, the film actually proves to be really entertaining.

Singer cleverly manages to morph the original concept of his first movies, which started 14 years ago while bringing in the modern flair that his newer films possess. The result is a Patrick Stewart and an Ian McKellen playing their usual flawless Professor X and Magneto, while James McAvoy and Michael Fassbender try to hit somewhere close to the mark. Fassbender and McAvoy find themselves once again in a battle between altruism and mutant world dominance.

The plot twist comes when the X-Men universe decide now is an appropriate time to involve time travel, or perhaps it’s more closely defined as consciousness travel. In any case, it results in Mr Hugh Jackman (Wolverine) finding himself in 1973 with the sole goal of stopping Peter Dinklage (the guy who plays Tyrian Lannister, for you Game of Thrones fans) from exterminating the entire mutant race.

The addition of time travel turns out to be a really nice touch, and we the audience get the rare opportunity to get a personal look at the path the heroes took to become the famous X-Men we know today.

I give this movie a 3.5 out of 5. Despite Singer’s best efforts, the seven film franchise fails to be completely refreshing, and a lot of the ideas seem to have been dredged from the grave or simply reiterated. All in all a good watch, but I don’t think it’s going to be winning film of the year any time soon.