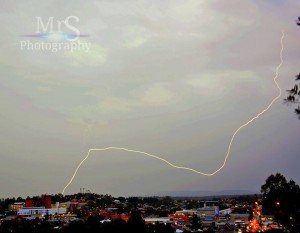 A spectacular bright flash and enormous explosion witnessed by Brisbane residents has been put down to a positively charged lightning strike, with a second sighted in the Ipswich area.

After the flash and loud rumble, Higgins Storm Chasing’s Facebook page was inundated with comment about people’s own experiences of the lightning strike.

Some described a blue glow, some said it was yellow and one resident said that the storm hadn’t even hit yet, which what was made the strike so different from other lightning strikes.

“They build a massive charge and come down well ahead of the storm itself,” he said.

“These bolts travel up to 50 km across the cloud tops before hitting the ground.”

The strike was part of storms that hit parts of the south-east on Wednesday afternoon.

Ilona Coote, a meteorologist from the Bureau of Meteorology said: “Positive lightning strikes have a tendency to be stronger than the more frequent negative strikes and approximately one in every ten lightning strikes is positive.”

Hundreds of people took to Higgins’ Facebook page with descriptions including an incredible blue flash, a big glow and that it felt like a small earth quake and there were reports of windows smashing and car alarms going off.

Mr Higgins was not surprised at the reports of windows smashing and said: “It would be possible for the windows to smash as the air at the strike point heats to many thousands of degrees very quickly and this causes the air to expand which cases a shockwave.”