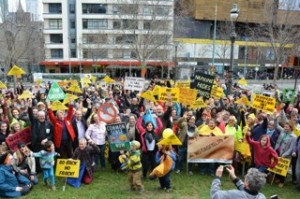 Farmers from Victoria’s Gippsland region took their campaign against coal seam gas exploration to Melbourne on Sunday, with hundreds of supporters backing their call for a ban on new coal mines and CSG exploration.

The protesters marched from city square to the state library, where a petition signed by 1000 people was handed to Greens MP Greg Barber.

Mr Barber vowed to ensure the issue was debated thoroughly in the Victorian Parliament this week.

Farmers said they were concerned that the process used to extract coal seam gas – hydraulic fracturing or fracking – would cause the contamination of regional water supplies and therefore food growing in the agricultural region.