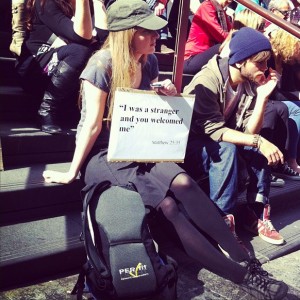 The policy, which declares that asylum-seekers arriving by boat without a visa will be sent to Papua New Guinea and will never be admitted to Australia, drew strong reactions from speakers.

“It doesn’t, because they feel they have no choice.

“There’s nothing that we can do in Australia that is more harmful than what they would face if they remained in their own country.”

Mr Stone said the Greens would like to settle some of the thousands of confirmed refugees waiting in Malaysia and Indonesia before they get on boats to “give them hope”.

Philma Kelegai, a campaigner for women’s rights in PNG said “Papua New Guinea is a very friendly nation, we are wonderful people…but our country has problems.”

She said 60 percent of PNG men admit to being involved in at least one gang rape, while 67 percent of women have been beaten by their husbands.

She said the country of 7 million people and 800 languages would not be able to provide access to basic services.

“We do not have hospitals to cater to this influx, we can not provide for the people coming in,” Ms Kelegai said.

“There are 1731 children (held in detention), this is a violation of the UN Human Rights Convention,” he said.

“People have shown they are disgusted at our governments appalling racism and are willing to take action,” he said.

Mr Rudd’s office did not respond to requests for a comment on the rally.