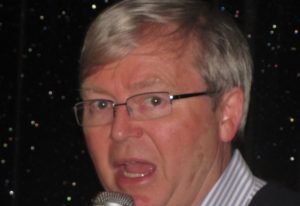 Federal Labor this week joined the fight against a Queensland government decision to cut 32 staff from the Brisbane Sexual Health Clinic at Biala House in Roma Street.

Hundreds of people attended the meeting at the Wickham Hotel, Fortitude Valley. Many wore badges saying “Hands off our sexual health clinics”.

Mr Rudd said the community needed to cause “sufficient pain to this state LNP government, and to Abbott’s mob, that they change this decision”.

“Why has the Newman Liberal National Government chosen, right up front, and in such a huge way, to take an axe to sexual health services?” he said.

“We’ve got to organise ourselves politically to make sure this is turned on its head.”

Biala House – a free and anonymous public service – treated about 13,000 patients per year, including 700 people infected with HIV/AIDS.

The state government made the cuts in March before announcing the decision would be reviewed by consulting firm Deloitte.

Health secretary Shane Neumann said one of his family members had been a patient of Biala House before their death.

He said there was no excuse for state cuts to health because federal funding to Queensland was increasing by 21 percent over four years after a $155 million transfer this year.

“If ever there was a bloke who didn’t deserve to be called a health minister, it’s Lawrence Springborg,” he said.

“One of the worst aspects of this catastrophic event that has been done in Brisbane is that it has been done without consultation,” Dr Bradford said.

Lesley Robert West, 43, said he had referred many of his friends to Biala House for help.

“The staff cuts, I tell you one thing, it’s just so wrong,” he said.

“The federal government has reduced funding to Queensland by $103 million,” he said.

“We’ve got an agreement that says that the federal government is going to take over responsibility completely for primary health care.”