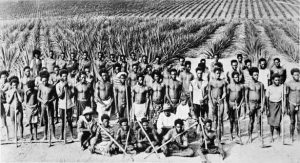 Events will be held across Brisbane this August to commemorate the 150th anniversary of the Australian South Sea Islanders’ arrival in Australia.

In an address to Brisbane City Council this week, spokesperson Jeanette Kirk spoke of the troubled past of the South Sea Island people, known as Kanakas.

When she asked for a show of hands from councillors as to who knew the significance of 2013 to her people, less than half in the chamber raised their hands.

“2013 is the commemoration of the first 67 young Kanaka men between the ages of 15 and 18 who came up the Brisbane River and landed at Redbank,” she said.

Between 1863 and 1907 62,000 Kanaka men, women and children were brought to Australia from 62 different Pacific Islands.

Though they were not afforded the same assistance available to Aboriginal and Torres Straight Island people, South Sea Islanders still played a significant role in the Queensland farming industry and other diverse roles.

“I was told when I was age 16 to forget about being a nurse by an education officer that came from Brisbane to our rural school, because they don’t take black people,” Mrs Kirk said.

“I’m glad my parents ignored that.”

Mrs Kirk went on to obtain three certificates and worked as an administration-nursing sister in south east Queensland.

“I am here today to request, on behalf of my proud Kanaka people, that all libraries and other educational facilities do something significant to promote awareness and recognise the contribution that my people made to the State of Queensland,” she said.

Mrs Kirk said the opportunity given her to speak to council was a positive step towards reconciliation. She asked the council to seriously consider the missing chapter of a history that needed to be told and respected.

“I think it is very important that everybody in this place recognises the significance of the event coming up in August that, of course, records the struggles of you and your people and your achievements,” Cr Adams said.