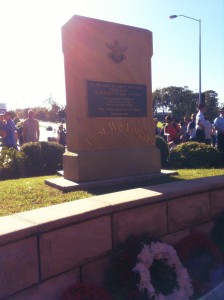 The flame of the Anzac spirit burns brightly with the youth of the Centenary Suburbs.

Flowered wreaths were laid by children paying their respects to the fallen in a moving Anzac Day service this morning.

Hundreds of locals gathered at the Centenary Suburbs War Memorial Gardens in Brisbane’s western suburbs, to pay tribute to those soldiers, sailors, airmen and women who paid the “supreme sacrifice”.

The stern young men of the Corinda RAAF Cadet Squadron Catafalque party stood under an Australian flag at half-mast as the young students of the Centenary State High School Band sat in assembly, playing ‘Waltzing Matilda’.

One local said the crowd was the biggest she had seen at the service, with observers spilling on to the streets.

Most importantly, the annual Anzac Day service was embraced by the youth of the Centenary suburbs.

10-year-old Brad spoke of what Anzac Day means to him: “I believe Anzac Day is a time to remember those who fought for our beaches, mountains, country and the way we live. A time to celebrate who we are, and what we have: a peaceful country.”

President of the Centenary Suburbs RSL Sub Branch Alan Worthington highlighted the importance of passing on the values of Anzac Day.

“It has been a tradition here to involve the youth of our community in the ceremony, as they are the ones to follow us in maintaining the Anzac spirit,” he said.

Jindalee Girl Guide Katelyn Lawson’s uncle fought in Vietnam, and passed on his experiences to his proud niece.

Katelyn spoke of what the Anzac spirit means to her: “Sacrifice, loyalty, compassion and mateship”.

“Mateship is the most important of these virtues. Mateship embodies all other qualities and represents the true Anzac spirit,” she said.

Katelyn Lawson and Brad Holt will now pass on what they have learnt about the importance of Anzac Day, and ensure that the flame of the Anzac spirit burns brightly for many years to come.