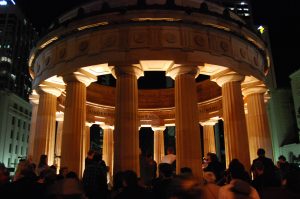 Thousands of people packed Brisbane’s Anzac Square hours before dawn this morning to honour Australia’s servicemen and women, past and present, the survivors and the fallen.

At just seven minutes past four, Anzac Square was declared full and crowds were diverted to King George Square, where they watched a live broadcast of the ceremony.

The Dawn Service at the Shrine of Remembrance began at 4:28am, the exact time Australian and New Zealand troops went ashore at Gallipoli 98 years ago.

Queensland Governor Penelope Wensley, who was accorded a royal salute, described Anzac day as a curious mix “of sorrow and regret, and of pride and celebration”.

“With each new conflict, each new call to arms, the Anzac story, the Anzac spirit, has grown and strengthened,” Governor Wensley said.

“We cherish, and we must be enormously grateful for the legacy these men and women have bequeathed to us through their sacrifice.”

Official guests and other visitors laid wreaths at the Shrine of Remembrance as a lone piper played the Lament.

A bugler played the Last Post and then after two minute silence, the Reveille.

Colin and Narelle Jones were standing in front of the Shrine of Remembrance with their four children before four o’clock.

“It’s for them to remember for the rest of their lives,” Mr Jones said.

He described the ceremony’s music as “unforgettable”.

“It really sticks in your mind.”

Retired Warrant Officer and Vietnam veteran Barry Mionnet was pleased to see so many people attend the Dawn Service, “especially the young people”.

“The Dawn Service brings my whole family together,” said Mr Mionnet, 71, who will march in today’s CBD parade.