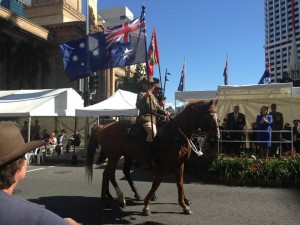 Tens of thousands of people lined the streets of Brisbane today to pay their respects at the city’s annual Anzac Day parade.

The march began on George Street at 10am in perfect Autumn sunshine with animated crowds cheering the marchers.

Two Super Hornets from the RAAF Base at Amberley flew overhead at the beginning of the parade and again around 11am.

Aged and infirmed veterans in a variety of transport including golf buggies and open vehicles waved and smiled as they were cheered on by the crowd.

The rhythm of the music from pipes, brass and drums accompanied the marchers.

Children wearing the medals of their fathers and grandfathers and carrying Legacy balloons walked hand in hand with veterans.

The cavalry regiments were represented on horseback and in armoured vehicles.

People made way for elderly and disabled spectators allowing them front row seats.

Children perched on the shoulders of parents and many sought vantage points on the balconies of adjoining buildings.