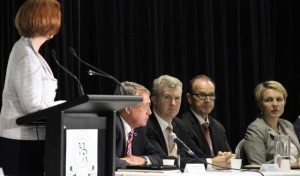 Mr Swan said the state’s closure of Eventide Sandgate to sell some of the site was “simply cruel”.

The Commonwealth pays for residents in state-run nursing homes and closing 140 beds could not be justified in any public policy, he said.

“We need a grass-roots community campaign to convince this state government that they’ve got this issue absolutely wrong.

“I think what we’ve seen from the way in which they’ve behaved is that they don’t really react rationally and it seems like their processes are absolutely chaotic.”

Mr Swan said he believed a community campaign could succeed – as it had when a strong opinion campaign during the Borbidge government had reversed a decision to close Eventide.

The Prime Minister told the meeting the Queensland economy could suffer a trades skills shortage in 10 to 15 years’ time as a result of state government cuts to TAFE outreach into schools.

“Now, I think that, at every level for Queensland, this and the other mooted cutbacks to TAFE are absolutely crazy,” Ms Gillard said.

Young people who drift away from school with no skills could have a very difficult life, she said.

Ms Gillard said the federal government would pressure the state government to prevent these cuts and locals were encouraged to join the campaign.

Mr Springborg said pursuing the sales but keeping the policy under wraps was dishonest.

“I fully expect Labor MPs to claim their secret aged care policy was scrapped,” he said.

“But it remained a key feature of ALP health policy, as revealed in a charter of Ministerial goals published by Mr Lucas and recovered in a subsequent Right To Information request.

“These plans were a hidden Labor agenda known to MPs and unions for years. They framed the sale of land at Eventide by the corrupt former Health Minister Gordon Nuttall and other subsequent changes.”

Labor transferred title to the land and buildings to Blue Care in 2011 in a deal brokered seven years ago by corrupt former MP Gordon Nuttall, Mr Springborg said.

After the sale, Queensland Health leased back facilities on the land from Blue Care which had not provided a time frame for the site’s development.

The state government is expected to respond to the independent Queensland Skills and Training Taskforce final report by the end of November.