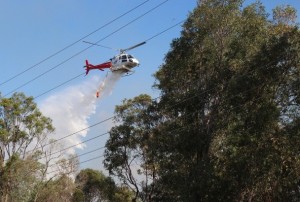 Two helicopters were brought into waterbomb a bushfire at Doolandella on Brisbane’s south on Tuesday afternoon.

She said although there was no threat, crews were working to protect a caravan and nearby homes.

Backburning began at Brookside Street, opposite Forest Park estate, after 4.30 pm as fire services sought to control and extinguish the fire.

The callout was received at 11:47am and the fire was under control around 5pm, the spokesperson said.