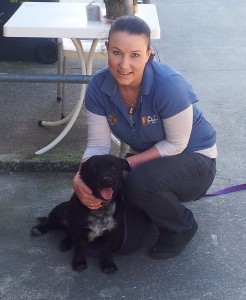 Jane hopes a new home can be found for her dog Jock.

Animal shelters across Queensland are facing an increase of 5,000 animals passing through each year according to RSPCA Queensland spokesman Michael Beatty.

Mr Beatty said the number of animals being surrendered or confiscated annually had increased from 41,000 to 46,000 over the past five years.

He believes the problem lies in people not thinking adoptions through, and the difficult economic situation faced by everyone.

“Its frustrating, a lot of animals that we get surrendered aren’t trained, they get little to no social interaction and have behavioural issues because of it,” Mr Beatty said.

“You have to try and look for the animal that is going to be right for you and your circumstances.”

One woman relinquishing her dog to Redcliffe’s Peninsula Animal Aid said the costs of keeping a pet had become too much for her.

Jane, who preferred not to give her surname, handed in her dog Jock this week. She said she didn’t want to give up her pet, but faced increasing bills. Sue said she hoped someone would be able to take care of Jock.

An influx of animals being surrendered to Peninsula Animal Aid has left their dog pens full and their space for cats quickly shrinking.

Increased volunteering has helped, but it is not enough to take the load off, say members of the shelter.

Volunteer and head supervisor of the shelter Marcia Thomson said the main problem facing the shelter was a lack of facilities to bring in more dogs.

“They bring dogs in and they make us feel guilty because we can’t bring it in, we have no more cages, we just can’t fit it,” Ms Thomson said.

“Then the responsibility goes back on them, but they don’t always accept it, then they go and tie it up at night out front.”

“Breakups are a big factor, and it is a part of the economic times at the moment. It affects not only the families but also the animals,” Ms Thomson said.

The main problem for the Redcliffe shelter was finding room for more animals to be accommodated, but space alone was not enough Ms Thomson said.

“If we made pens for 10 more dogs we’d fill them, then we’d be saying to the eleventh person that we can’t take theirs in.”

Volunteer carer Lynn Quick said people need to think responsibly about adopting an animal, and to treat animals as a part of the family.

It is a sentiment shared by Mr Beatty, he said a lack of attention and activity is contributing to the increase in animals ending up in shelters who have been surrendered by families.

“People need to treat animals as a member of the family,” Mr Beatty said.

“You wouldn’t leave your child chained out the back for 24 hours, and an animal is no different.”

When asked if she had any ideas about how to educate people in responsible pet ownership, Ms Thomson said neither she nor the RSPCA had the answer,

“It is the $65 million question, and for the sake of these animals I would love to know the answer.”

To take the load off shelters, the RSPCA is calling for more adoptions by Queenslanders looking for a companion.

“We encourage people to adopt from the shelters, and to look on the RSPCA website for an animal that suites them.”