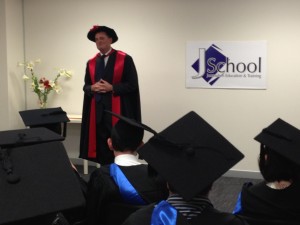 Mr Thomas, national chief correspondent of The Australian, urged the new graduates to be constantly vigilant in their coverage of society.

He recalled the media-initiated Fitzgerald Inquiry into government corruption in the 1980s to warn that the existence of a dominant state government in Queensland posed dangers to which journalists should be alert.

“His incisive research has resulted in some of the most important revelations and scoops of modern journalism,” Professor Henningham said.

“His scoops include his articles and book on the surgeon Dr Jayant Patel, resulting in a criminal trial for manslaughter, as well as his investigation into the improper conduct by officials dealing with another doctor, Mohamed Haneef, wrongly accused of terrorist-related activities.

“This year we saw his expose of Wivenhoe Dam management at the time of the Brisbane floods – revelations which resulted not only in reconvening of the official flood inquiry but also the changing of the dates of the 2012 state parliamentary and local government elections.”

More recently his sleuthing into the current prime minister’s involvement as a lawyer in the establishment of a union “slush fund” in the 1990s has had a major political impact.

Mr Thomas congratulated Jschool’s graduates on achieving their diplomas after a year of study, and said the spirit and friendliness of the group reminded him of his first newsroom at a regional daily newspaper, the Gold Coast Bulletin.