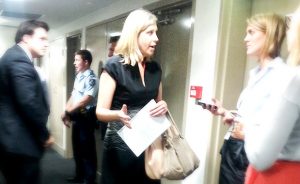 Nicole Johnston talks to reporters after being escorted from the council chamber by police.

Police were called when Cr Johnston refused to accept a suspension order and leave the chamber during a 10-minute adjournment of the meeting.

Three police officers arrived after 20 minutes and one entered the chamber to escort Cr Johnston.

Cr Johnston told the police officer that her suspension was illegal as council chairman Cr Margaret de Wit had refused to answer a procedural question.

After further discussion with the police officer, Cr Johnston left the chamber quietly.

Cr Johnston called for a point of order when Lord Mayor Graham Quirk named councillors who had made 155 complaints listed in the Queensland Ombudsman’s review into code of conduct complaint matters.

“Under the code of conduct, the names of complainers are confidential,” Cr Johnston said.

Legal advice was sought on the point of order and provided after the motion to accept the Establishment and Coordination Committee report was carried.

Cr Quirk had tabled the Ombudsman’s review and a recommendation to increase the membership pool for the Councillor Conduct Review Panel (CCRP).

Cr Milton Dick asked what would be the additional costs of increasing the membership pool to six, from a minimum of three as required under the City of Brisbane Act.

Cr Quirk replied that panellists were paid for the time they served, and an increased pool would ensure a panel could be convened as needed.

“To go all the way [under the City of Brisbane Act] is an 18-step process,” he said.

Outside the chamber Cr Johnston said council had refused to investigate her complaints and the Lord Mayor had not stated how many complaints had been investigated.

The Ombudsman’s report had been released because of her questions in council two weeks ago, she said.

Cr Johnston said the code of conduct was not necessary as councillors’ statutory obligations were contained in the City of Brisbane Act.