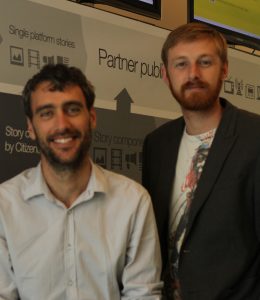 Opportunities for citizen journalists have been opened in a multi-media newsroom project at the State Library of Queensland.

CitizenJ, an innovation of the library’s digital cultural centre The Edge, will let people try their hand at reporting and editing, with a view to adding to media diversity.

The Edge’s executive manager Matt Fallon said members of the public had a great deal to offer.

“People’s ambitions and skill sets are to be matched,” he said.

“I feel the fact that people who come here are intrinsically motivated. They come here because they want to be here.”

“The information needs people have had has moved along and it is not the people in the driving seat who have been dictating that. It is the people themselves, technologists and others that were making this shift take place.”

“There is a re-creation of the industry at the moment. It is exploding with this re-creation process and there are new ideas on collaboration and looking at specialists news.

Mr Fallon said the information role of journalism connected with the mission of the library.

He said the question asked was: “How can we tailor a service for our user community that is forward thinking and engaged with library ideas but is connected to a making culture?”

“Libraries are the informal environment, the informal knowledge space where people will come for their own reasons to create and define their own goal and go about achieving this,” he said.

“Conceptually we have met with scores of journalists and scores of interested technologists and many discussions on what things The Edge does.”

The project would build on and develop the interdisciplinary nature of journalism.

“Journalism is the crafting and integration of science, art, technology and enterprise,” he said.

“It is an art, it has enterprise components, technology is involved in the creation and science is the
subject matter.”

Mr Fallon said CitizenJ newsroom co-ordinator John Corlett was actively inviting those with a compelling story to come and participate in the newsroom.

Partnerships have been set up with media groups including 4ZZZ, 4EB, the Walkley Foundation, the Media Entertainment and Arts Alliance and Community Media and Training.