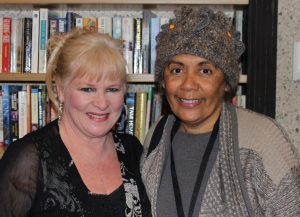 Brisbane audiences have opened their hearts to Alana Valentine’s play A Head Full of Love, donating more than $75,000 towards indigenous people with chronic kidney disease.

The play, based on verbatim interviews with renal patients, blasts the myth that alcohol is a primary cause of indigenous kidney disease.

For 12 years “The Purple House” in Alice Springs has supported renal patients, some of whom provided inspiration for A Head Full of Love.

“Lots of non-indigenous think it’s about grog,” she said.

“The great majority I’ve been looking after have never touched a drop of grog in their lives.”

The Purple House also provided dialysis in three communities for patients to stay “on country” with family to share cultural knowledge.

Actresses Colette Mann and Roxanne McDonald fundraised $15,000 for a mobile dialysis unit from Northern Territory audiences in the play’s 2010 season.

At the end of each Brisbane performance, Ms Mann and Ms McDonald challenged audiences to give generously to the Purple House.

Ms Brown told Newsbytes she was overwhelmed by the $45,283 donation collected by the Queensland Theatre Company, and said a separate $30,000 cheque was in the post from another Brisbane donor.

Ms Brown has thanked Brisbane donors on the Queensland Theatre Company’s facebook page, and she will extend her personal thanks to Ms Mann and Ms McDonald.

One Response to “Theatre-goers inspired to help disease victims”