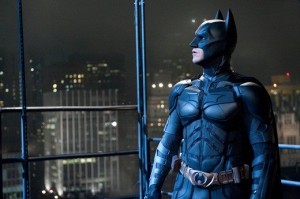 Christian Bale dons the funny suit again for his role as a somewhat older Batman.

As the most highly anticipated film event of the year, the most obvious question is whether The Dark Knight Rises lives up to the hype.

Director Christopher Nolan found great success when he re-introduced the world to the beloved Batman.

There are many elements which make this film great – the portrayal of iconic Batman characters, a plot which is a worthy conclusion to the Batman trilogy, and a soundtrack which will have your heart pounding from the opening set piece all the way to the finish.

Those are just a few components in the Batman vehicle, which has led to great success throughout the trilogy and which are not lost in The Dark Knight Rises.

This story takes place eight years after the events of The Dark Knight, so we are introduced to a battle-worn and aging Bruce Wayne who is now feeling the effects of his alter ego.

The Batman has not been sighted since taking the fall for the murder of Gotham District Attorney Harvey Dent in the last film.

Wayne now spends his time locked away in Wayne manor until he is encouraged to don the cape and cowl for Gotham one last time.

Christian Bale had to change his portrayal of the now recluse Bruce Wayne to show what Nolan has described as “an older Bruce Wayne, he’s not in a great state”.

Bale does this to great effect with the aid of a little grey hair, and an even huskier trademark Batman growl.

Throughout the film you see a physically damaged Bruce Wayne, battle scars and all, and while his age is not disclosed it is evident the years are catching up with him during his initial confrontation with a younger, faster and stronger villain in Bane.

It has been said a Nolan Batman film is only as good as the villain. I don’t agree, but can understand the argument.

Liam Neeson in Batman Begins plays the mentor and antagonist, Ra’s al Ghul of Batman, which was followed by Heath Ledger’s Oscar winning turn as the disturbed Joker in The Dark Knight.

Tom Hardy continues this now epic tradition of Batman baddies as Bane, the incredibly powerful and intelligent terrorist leader who thankfully proves to be a far cry from the Bane in the questionable Batman and Robin of the nineties.

Hardy wanted to in part stay true to the comic book Bane by maintaining his florid speech and his gorilla-like physicality, which is demonstrated through a contradiction between Bane’s voice and body.

Nolan perceived Bane as a suitable foe for Batman at this stage in the story because he could challenge him physically and mentally, which can be compared to Clubber Lang and Rocky Balboa – very old lion versus young lion.

The film features cameos from characters in the previous movies with one reference for the Batman devotees when alligators are rumoured to be in the sewers, but I doubt most people will get that.

Anne Hathaway makes the perfect Catwoman, cool and charismatic yet initially naïve and somewhat bad. Besides it would not be the same if Catwoman and Batman couldn’t disarm one another.

Joseph Gordon-Levitt is one to watch, as his character John Blake is very reminiscent of an aspiring caped crusader, which Bruce Wayne finds somewhat revitalising.

Michael Caine, Morgan Freeman and Gary Oldman all reprise their iconic roles each having their part in the film with their own effect on a tired and beaten Bruce Wayne.

The beautiful Marion Cotillard plays the ravishing Miranda Tate who is a member of Wayne Enterprises executive board, who also encourages Bruce Wayne to return to society.

Hans Zimmer provides the soundtrack for Batman’s final outing, which drives the action and suspense to another level, with compositions which can be directly attributed to Bane, Catwoman and Batman.

The Dark Knight Rises grossed $160.9 million, which is the third highest opening weekend of all-time behind The Avengers and Deathly Hallows Part Two.

Box office aside, this is a triumph for Christopher Nolan. Whether you prefer The Dark Knight to this is up to you, but words can only go so far as to convey what kind of movie going experience this is.

This movie not only lived up to the hype, but it has set the benchmark for all future comic book to film adaptations.

Along with this Nolan has rejuvenated a legendary character for a new generation, providing Batman the send off he deserves in this last instalment.

This film really is the total package and I urge anyone who wants to see a bloody good film to see this one.

Besides, Batman is cool.