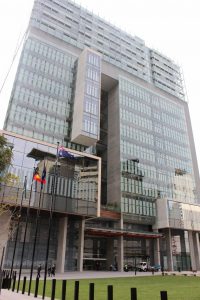 Opened for public viewing in the afternoon, the $570 million building has 39 courtrooms over seven of its 19 floors.

Level 10, which houses the State Reporting Bureau and mediation rooms, could be converted to an additional six courtrooms if needed, a spokesperson for the Department of Justice and Attorney-General said.

Digital evidence can be presented in all courtrooms, but only 14 courtrooms may hold full e-trials, where all exhibits and testimony are viewed electronically.

E-trials were held for Dr Jayant Patel and Max Sica.

Natural light enters the building at all levels and the courtrooms feature light wooden panelling.

The existing Magistrates Court and the new Supreme and District Court linked by a green city square are said to “form a legal precinct covering an entire city block” bounded by George, Roma and Turbot Streets.

Court operations begin at the new site on 27 August. The Queensland Government will seek to recoup some of the costs of the new structure by developing the existing Supreme and District Court buildings in George Street.