Prado masterpieces bring the heart of Spain to Brisbane 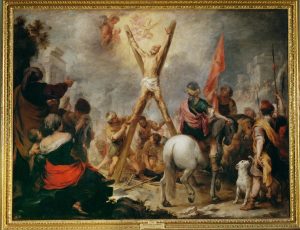 The masterpieces of Prado take their audience on a journey of religion, mythology and sainthood in the Queensland Art Gallery exhibition “Portrait of Spain”.

As you step into the largest most significant international loan undertaken by Madrid’s museum, Museo Nacional del Prado, you feel as though you are stepping through the corridors of Madrid.

Dr Miranda Wallace gives a curator’s perspective of how the exhibition captured Spanish history through its passion as well as through “the weakness and frailty of human nature”.

The artworks themselves emphasise the power behind emotions and the impact of the subjects’ actions on the artists and citizens of Spain during the period.

The story of Mary Magdalena provided José Antolínez with “one of the few opportunities to portray a woman of great beauty, revealing parts of the body – breasts, feet, legs – that in other contexts would have been considered indecent to show”.

Bartolomé Esteban Murillo painted ‘The Martyrdom of Saint Andrew’ (pictured above) which “emphasised the idea of sacrifice and redemption.”

Dr Wallace told of how many of the religious paintings were once hanging in the churches of Spain, but as this was looked on as idolatry the paintings were confiscated by the state.

A ticket through the exhibition is accompanied by La Sala del Prado which allows visitors to enjoy the vibrancy and culture of Spanish cuisine.

La Sala del Prado is complemented by the interactive lounge environment which gives the opportunity to try your own hand at still life artwork and your own face in a portrait.

“Portrait of Spain” is open from 10am to 5pm weekdays and 9am to 5pm weekends and public holidays from the until 4 November 2012.