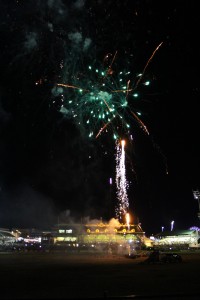 After selling 180,000 Dagwood dogs and 100,000 Strawberry Sundaes, Queensland’s largest annual event – the Ekka – has closed for another year.

In the 135th running of the show more than 400,000 people attended the 10-day festival, showcasing the best of the Country in the City.

According to the RNA more than 20,000 cheese toasties and three tonnes of yoghurt were sold and more than 15,000 wine samples were given away across the event.

RNA chief executive Brendan Christou said the association was thrilled with the response from the community.

“We had the perfect forecast for the full 10 days of show and we can’t thank the public enough for their support,” he said.

“This really is the people’s show, they came out in droves to support it and we’re humbled to stage it on their behalf.”

More than 80 years after Sir Donald Bradman made his test debut against England at the RNA Showgrounds, cricketing legends Adam Gilchrist and Glenn McGrath were again on the arena in the Suncorp Bank Cricketing Legends Challenge.

The program offered Ekka visitors the chance to meet and play alongside their cricket heroes.

Families are also hailing the 2012 Ekka the cheapest ever.

Greenslopes mother of two Jenny said it eased the cost on her family.

“The single ticket with entry, rides and food makes it a lot cheaper on the budget and good for the kids,” she said.

2012 also marked the first year of use for the newly transformed Royal International Convention Centre which was home to The Royal Queensland Dog Show.

Planning is already underway for the 2013 event set to run from August 8-17.