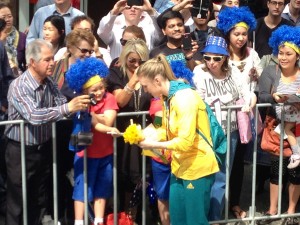 The CBD was transformed into a sea of green and gold as fans lined the streets to catch a glimpse of Australia’s Olympic athletes after their return from London.

Crowds in their thousands filled Queen Street Mall at midday on Friday to see about 80 athletes for the official Brisbane welcome home parade.

Excited Olympians stopped to mingle with the equally excited crowd by signing autographs and posing for photos with their fans.

Crowd favourite Sally Pearson led the parade, marking a triumphant return home for the Queenslander after her gold medal win in London.

An overjoyed Sally was awarded the keys to the city by Lord Mayor Graham Quirk, who said Queenslanders had performed well in the games.

“We are always the best at the Olympic and Commonwealth Games and it’s been fantastic to be able to share it with everyone,“ she said.

Premier Campbell Newman also made special praise for Queenslanders in the Olympic team.

“That’s five gold medals out of seven for a state that counts about 20 percent of the nation’s population.”

Sydney and Melbourne held their own Olympic parades earlier in the week.