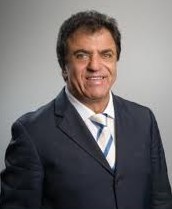 Celebrity hairdresser Stefan Ackerie was reprimanded in Parliament yesterday by the Speaker, Fiona Simpson, after taking photos from the public gallery.

Although not named by Ms Simpson, her warning to the gallery came in response to Stefan’s flamboyant visit to the state house for yesterday afternoon’s question time.

Stefan, accompanied by veteran LNP MP Howard Hobbs, started waving to members and taking photos as soon as he was seated. Security guards did not appear to notice his behaviour – which is strictly against parliamentary rules – and he continued taking pictures for more than five minutes.

MPs, including cabinet ministers, waved back to Stefan.

When the Speaker’s attention was drawn to what was happening, she issued a firm warning: “I remind people in the gallery that under the rules of this House you are not allowed to use cameras or mobile phones in the gallery and I ask you to cease doing that,” she said.

He was also asked by a security guard not to lean on the railings and peer over into the chamber.

A somewhat abashed Stefan left the gallery some minutes after his dressing down.