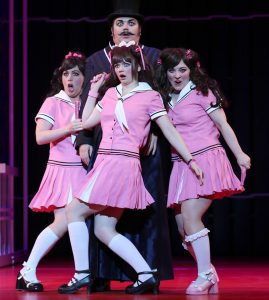 Opera Queensland’s production of The Mikado fizzes with charm which belies its serious message.

Flirting, the capital crime in The Mikado, reflects the hot potato of London politics in March 1885: child prostitution. The age of consent was raised from 13 to 16 some months later – after a sensationalist newspaper article (“The Maiden Tribute”) was published and virgins dressed in white marched to Hyde Park.

Stuart Maunder provides tight direction to the cast – a mix of experienced singers and those in the young and developing artists program – as Gilbert and Sullivan’s political satire transports us to Japan.

Yum-Yum (Kristy Swift) – a “little maid from school” – will be married, reluctantly, to her older guardian Ko-Ko (Eugene Gilfedder). Her only escape is a plan hatched by Nanki-Poo (Dominic Walsh), her “wandering minstrel” boyfriend – the Mikado’s son in disguise.

The Mikado (Richard Anderson) commuted Ko-Ko’s sentence for flirting to the role of Lord High Executioner, and now demands an execution. Nanki-Poo, on the run from court cougar Katisha (Adele Johnston) learns that Yum-Yum is betrothed. He offers himself as victim, if he may be married to Yum-Yum for a month.

This unlikely alliance between Ko-Ko and Nanki-Poo to save their lives will be resolved by the most outrageous act of flirting in musical theatre. The entire cast and crew enjoy the collusion.

Simone Romaniuk has designed light portable sets and costumes that are simple, stylish and give a nod to modern “hello kitty” culture. Complementing her sets, Don Byrnes lights the paper screens to change colour, subtly changing locale. His lighting is most dramatic in Act II as Katisha enters red with rage, sings the blues, and is chased away in the rain.

Brian Castles-Onion and Queensland Symphony Orchestra members provide lyrical support to the score which include popular trademark songs “I have a little list” and “The flowers that bloom in the spring”.

Actor Eugene Gilfedder, in his first appearance with Opera Queensland, inspires as Ko-Ko. He bumbles and schemes, and adds subtle stage business to engage us. He artfully employs the Rex Harrison technique of speaking on pitch during his songs.

Mezzo-soprano Adele Johnston (Katisha) is a strong, imposing match for Gilfedder at climax, but her vocal entry upon arrival with the Mikado is too soft. 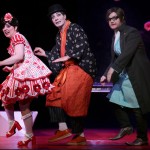 Richard Anderson’s rich bass gives gravitas to the Mikado. Royal support is given by Jason Barry-Smith (Pish-Tush) who delights with his clear diction and excellent delivery and Andrew Moran (Pooh-Bah) who relishes every high office in the land, and is not above a little graft – if the officers will agree.

Gilbert and Sullivan were masters of political satire disguised as British farce. The Mikado slips us the sake in a cup of warm English tea. May it be on your musical list this winter.

2 Responses to “Review: The Mikado”