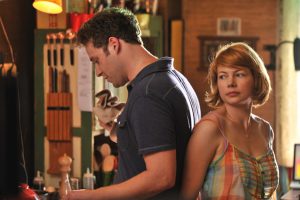 I loved Sarah Polley’s impressive 2006 directorial debut film Away From Her. She showed a subtle hand in depicting an elderly couple dealing with the onset of Alzheimer’s without sinking into midday movie territory.

In this her second feature film, the young Canadian actress, writer and director takes on the topic of marital infidelity.

The film stars Michelle Williams as Margot, a young freelance writer married to Lou (Seth Rogen)- a cookbook writer who specialises in chicken. They have been married five years and their relationship has reached a stagnant impasse.

As Margot later points out “he is a great cook, if you like chicken”. A heavy-handed metaphor if ever there was one.

On a work trip she meets Daniel (a charismatic Luke Kirby) a rickshaw driver/artist and the attraction is instant and intense. And it just so happens he lives across the street from her. (Don’t you love coincidences like that!)

The film then plays out a familiar will she or won’t she scenario, as Polley slowly lets the tension build.

What the film does really well is create a mood of heightened eroticism. The steaming heat is so palpable you can almost feel the beads of sweat trickle down your neck. We watch as Margot and Daniel restrain themselves during their many, sexually-charged encounters throughout the sweltering Toronto summer.

Polley uses these characters to ask many questions. How do long term relationships affect how we end up viewing ourselves? Are love and lust mutually exclusive? What happens to a relationship when it becomes devoid of passion?

These are undoubtedly bold questions to be asking in any film and are ripe for dramatic tension. But the film falters in some areas. Most notably when there is dialogue involved.

The scenes between Margot and Lou felt forced and artificial. Their entire relationship is based on this overly sweet interplay which may have been funny once, but now feels empty. I found Lou to be quite a bland, passive character and it would have been more interesting to me, if the distinction between Lou and Daniel wasn’t so obvious.

This contrasts sharply from scenes of great authenticity. Like a communal shower scene with Margot and her sister-in-law Geraldine (Sarah Silverman) as they chat casually in the nude with some much older women about love and marriage. The scene is handled with a delicate maturity by Polley who doesn’t sexualise the moment.

But for me the film worked best in the dialogue-free scenes. Some of these scenes drip with a warm sensuality and allow these talented actors to say more with a look than any line of dialogue could.

Michelle Williams is of course impeccable. She is one of the smartest actresses around today and brings such poise and heartbreak to her role as a woman torn between the familiar and the unknown.

I commend Seth Rogen for branching out from his earlier comedic roles. Following from his turn in 50/50, he is proving to be an actor with decent range. Luke Kirby exudes confidence and mystery as Daniel, without overplaying the role.

Sarah Silverman is brilliant as Geraldine, a recovering alcoholic. She brings an emotional truth to every scene she is in and I enjoyed her performance the most.

There is a great use of pop music throughout, including the Buggles hit “Video killed the radio star” and Leonard Cohen’s “Take this waltz”, from which obviously the film gets its name.

The cinematography by Luc Montpellier, who also shot Away From Her, captures the city of Toronto in a unique way. The colour palette of the film is used extremely well right from the opening close-up of Margot’s blue nail polish.

Overall I came away from Take This Waltz with a sense of admiration for what Sarah Polley was ambitiously aiming for here but felt she narrowly missed the mark. Polley clearly has a great eye for observing the nuances of relationships and the rhythm with which they can ebb and flow. I like that she took risks here and very much look forward to her next film.