Aussies fly on their broomsticks to England for wizard games 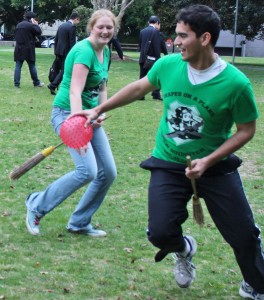 Australia’s quidditch team will compete in the international summer games in Oxford, timed to coincide with the London Olympics.

The sport on broomsticks has swept the globe since 2005 when Xander Manshel adapted the rules in J.K. Rowling’s Harry Potter books for muggles (non-magic humans).

“The games will be posted on You-Tube about as fast as we can get them up. We do have a Twitter page for the event @Quidditch2012, which will be updated throughout the day,” Ms Kumaki said.

The Olympic Torch will travel through Oxford on July 9 and a half-hour demonstration match will be played at the ceremony.

“It won’t be very large, but it is a chance to be involved in the Olympics in some way and to gain more news coverage for the sport of Quidditch,” Ms Kumaki said.

“We do not have any official links or affiliations with the Olympic Committee beyond the participation in the torch celebration in Oxford.

“We are independently planning our event and are carefully avoiding copyright infringement.”

J. K. Rowling has been invited to the event.

“I cannot say, however, if she would attend,” Ms Kumaki said.

Each quidditch team requires seven players: three chasers who are required to score, two beaters whose job is to prevent the opposing team from scoring, one (goal) keeper and the seeker whose job is to catch the snitch.

UNSW Quidditch Society president Beth Crane is a chaser on the Australian team.

Selection required those with sporting ability, passion and ability to finance the trip.

“It’s just as important that we are really good delegates for the sport and our country,” Ms Crane said.

She is proud that her UNSW team, Snapes on a Plane, won the first ever Quidditch Universities of Australia Federation League (QUAFL) Cup in 2010. (The quaffle is the ball used to score.)

Ms Crane described the magic of quidditch: “You take someone who’s been interested in Harry Potter and somewhat in sports and imagine their entire life – and you can combine the two.”

Australia will send a team to the 2013 World Cup in America, and North Queensland would bid for the 2015 World Cup, he said.