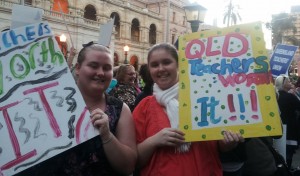 Teachers protested outside Parliament House today over a pay and conditions offer from the Queensland Government.

Queensland Teachers Union representatives said the government’s offer of a 2.7 percent pay increase was in exchange for removing conditions from the current agreement and replacing them with “policy”.

The QTU’s 44,000 members are currently being balloted by the Union on whether to accept or reject the Government offer. The ballot closes on Friday, 22 June.

Mr McCaskell had turned down a recent offer to work for a mining company as he was committed to a socially important career as a teacher.

“As university students we are not entitled to an offer that the government has made,” he said.

“So I would like to ask all of you today on behalf of the students, those of us at university that don’t yet have a say, to stand up for us and say that we reject their offer, and like you, we expect better from our employer”.

Sky Robinson, a USQ student in early childhood teaching, came today “to make a better future for the children”.

“We’re only in our second year so by the time this gets started it’s going to take us three years. It’s going to be harder for us to get a job,” Ms Robinson said.

“I want to thank the ALP and Katter’s Australian Party for opposing it all the way through to parliament. A fight they were always going to lose, but a fight that’s worth fighting,” he said.

Mr Maloney offered QTU support to assist other unions in their struggles, and said: “As you can see they’ve already made differential offers.

QTU members and affiliated unions sang “Solidarity forever” to close the rally and vowed to return.