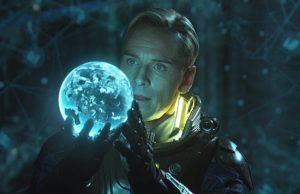 From the opening shot of an oval, pebble shaped ship rumbling away before a sickly white human-looking individual you know you are watching a film which is unabashedly science fiction.

The plot centers on an expedition to uncover the meaning behind a cryptograph depicting a constellation placed in a 25,000-year-old cave on earth. The mission: to discover the proposed birthplace of mankind.

Films are built for escapism, and those that deliver the most believably crafted spaces are the ones that stand apart from others.
Prometheus doesn’t falter in creating believable spaces wherein the scenes unfold.

Prometheus, the exploratory vessel piloted by the story’s protagonists, is just what you’d think a trillion dollar future space ship should look like, but there is no wasteful extravagance in its design. Similarly the subterranean complex that is the focus of the team looks as old as it is described and is hauntingly alien. Both locations are grounded by the planet on which the film takes place, a bleakly grey, mountainous world.

Ridley Scott returns with the same cold, hard sci-fi for which he is known, along with his nuanced direction. As a film Prometheus is satisfying, but for viewers of Scott’s original Alien it may seem like ground already trodden.

An alien vessel giving a menace to the venturing human explorers, a strong female character who is a lone survivor – if it sounds familiar it’s because it is. As a film alone it is not a weakness, but in the context of Scott’s original Alien, Prometheus‘s script does not venture far.

Scott works with modern visual effects thoughtfully – the ships and gadgets are more complex than his original films, and visually the universe of Prometheus is realised as well as any other modern sci-fi film.

Prometheus dangles the question of creation before viewers, but just as the headstrong Elizabeth Shaw (Noomi Rapace) sidesteps the answer when asked, the question itself is never definitively answered throughout the film. For now the aliens at the heart of the story are a mystery.

For anyone who knows the malevolent Weyland Yutani Corp from the expanded universe that Prometheus inhabits, the eventual betrayal by the ship’s resident Cyborg David (Michael Fassbender) and Weyland spokesperson Meredith Vickers (Charleze Feron) will come as no surprise.

Credit must be payed to Fassbender’s portrayal of David. He shows his chilling robotic nature without ever displaying a flicker of machinery, something which is telling of Fassbender’s abilities.

Prometheus gives everything expected from a sci-fi horror, and does it with exceptional class, but overall it plays it safe. As good as it is (and it is good), coming from Scott it should have been much more.

One Response to “Review: Prometheus”