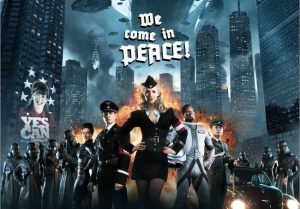 If Iron Sky were to be summarised in two words it would have to be “Moon Nazis”. As a fun idea for a B-movie it’s up there with Snakes on a Plane and Lesbian Vampire Killers. But much like those two movies, a single clever idea isn’t quite enough to sustain Iron Sky through its running time.

A Finish-German-Australian co-production, Iron Sky was funded not by a major studio but by small online investors and film enthusiasts.

Despite its unconventional funding model Iron Sky is a professionally produced film that tries to make the most of its relatively small budget.

The original premise of this B-grade action comedy is that at the fall of the Third Reich a small group of Nazis somehow hid on the dark side of the moon. On a secret base built inside the moon this small group of Nazis live and plan for the day when they eventually return to Earth to “liberate” it.

But when astronauts from an American moon landing discover the secret base the Moon Nazis begin their invasion early. Meanwhile, a deeply popular American president (a clear parody of Sarah Palin) tries to use the prospect of a war with the Moon Nazis to secure a second term in office.

This is a film that I wanted to love and that I really tried to love, but it is sadly let down by an average script, jokes that fall flat and some lifeless acting.

It’s a shame, because the movie has some real strengths. Despite its small budget for a movie of its scale, the special effects and action scenes are at times more impressive and engrossing than Hollywood films with a budget 10 times the size.

Unfortunately the quality of the acting differs markedly. The German cast who play the Nazis play their roles quite well. Götz Otto is impressive as prospective Führer Klaus Adler and Julia Diezte is equally enjoyable as Nazi love interest Renate Ritcher.

The same cannot be said for the English-language cast however. Stephanie Paul’s Sarah Palin parody falls flat for much of the movie and Christopher Kirby as the male model and astronaut is another weak spot. All cannot be blamed on the actors, as the jokes they are given to work with were mostly fairly poor.

It’s a shame because with some sharper writing and better acting Iron Sky would have been a really enjoyable and fun action comedy film.

Director Timo Vuorensola shows clear talent as an action movie director, but next time he needs a sharper script to work with. Iron Sky is still a mildly entertaining and original film but sadly it never quite lives up to its potential.