Photo exhibition tells of the horrors of war 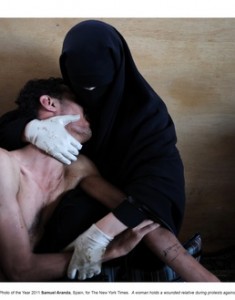 A mother comforts her injured son. The scene echoes the Christian iconography of the Pietà – Mary holding a crucified Jesus. Except this mother and son are inside a mosque.

On display at the Brisbane Powerhouse as part of the 55th annual World Press Photo exhibition is the Photo of the Year for 2011, taken by Spanish photojournalist Samuel Aranda last October in Yemen.

The 18-year old son turns towards his mother in agony, his skin marble-like against the black cloth of her burqa. Her face is hidden. What she must be feeling is not difficult to imagine.

He was teargassed while taking part in street demonstrations against the regime of President Ali Abdullah Saleh. The son’s suffering wasn’t in vain: Saleh’s 33-year long rule ended a month later.

Other photos in this exhibition of prize winners are no less powerful. Some are intensely aesthetic, like the silhouetted divers at the Shanghai World Aquatics Championships (taken by Adam Pretty, Australia).

Some are shockingly graphic, like the severed head lying on a footpath in the Mexican city of Acapulco, a gruesome but common sight in a country riven by the ferocious wars between the drug cartels (by Pedro Pardo, Mexico).

From a staggering 101,254 photos taken by 5,247 photographers the judges awarded six prizes, as well as several honourable mentions, in each of the nine categories: Arts and Entertainment, Contemporary Issues, Daily Life, General News, Nature, People in the News, Portraits, Sports, and Spot News.

Ailing former Egyptian President Hosni Mubarak is wheeled into court on a hospital trolley (by Mohammed Al-Law, Egypt), while the bloodied corpse of Colonel Gaddafi lies on a mattress in a cold-storage room on the outskirts of Misrata in Libya (by Rémi Ochlik, France).

In Colorado a sheriff’s deputy serves an eviction order on Julie Holzhauer and her family of five for non-payment of rent (by John Moore, USA). Ms Holzhauer is in tears. Like millions of other Americans she is a casualty of the housing crisis in the richest nation on earth.

The exhibition challenges a viewer’s parochialism. Starkly and disturbingly, it depicts the non-universality of customs and beliefs.

Public executions and underage marriages are not part of Western culture. The immediate response is to disapprove, to want to bring about humanitarian change. Such regressive practices shouldn’t be allowed.

Ostensibly looking outwards upon the world, such photos invite a Westernised viewer to look inwards: images functioning not just as a window, but as a mirror.

The exhibition also chronicles humankind’s relations with Nature during 2011.

Five prize winning photos deal with the devastating Japanese tsunami. A catamaran sits on top of a two-storey building (by Yasuyoshi Chiba, Japan). Surrounded by the smashed remnants of Natori, a town on the north-eastern coast of Japan, a woman sits crying (by Toshiyuki Tsunenari, Japan).

Off Carliforte Island near Sardinia a scuba diver swims with huge tuna (by Francesco Zizola, Italy). In West Bengal an escaped leopard is frozen in the act of leaping onto a forest warden, its jaws open, its claws bared (by Salil Bera, India). The warden survived; the leopard had to be killed.

The fates of the powerful and the powerless, the destructive effects of nature and human weapons, the way people live, work, struggle and die, their frailty and resilience – dream-like, nightmarish, this exhibition portrays a world savagely imperfect yet endlessly engrossing.

The exhibition can be seen at the Brisbane Powerhouse until Sunday 24 June. Entry is free. The prize winning photos can be seen online at www.worldpressphoto.org.