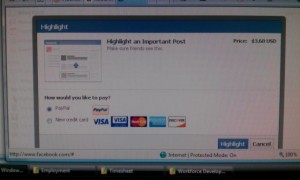 Facebook has raised the ire of many of its Australian users by quietly rolling out a feature that charges users to highlight their posts.

Although Facebook has always said it would remain free, the feature enables users to pay to ensure their posts are seen by more of their friends.

The controversial feature was introduced in New Zealand last month, with Kiwis given the option to pay $2 to highlight their posts.

The feature was quietly introduced for Australian Facebook users recently although not all local users were given access.

A highlighted post stays within a user’s news feed for longer and is seen by more of a user’s friends.

A recent study showed that the average Facebook post was read by only 12 percent of a user’s friends.

The feature still appeared to be in the testing phase, with some users being offered the feature free and others being charged to use it.

Twitter user Kirk Broadhurst said: “I don’t understand why anyone would unless they are selling something.”

It follows a difficult few weeks for Facebook with the stock price dropping rapidly since it went public last month and after CEO Mark Zuckerberg was sued by investors.

Facebook was contacted numerous times to comment on the Highlight feature but declined to make an official statement.

2 Responses to “Facebook users asked to pay for highlighted posts”