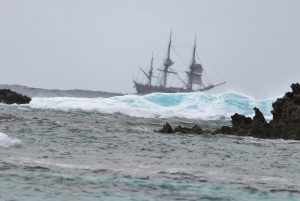 HMB Endeavour in the swell off Lord Howe Island

In a tribute to Captain Cook’s famous 18th century voyage to observe the Transit of Venus, the Endeavour replica sailed to Lord Howe Island in rough seas for the 2012 transit.

The expedition by the national maritime museum and Sydney Observatory commemorated transit observations by the NSW government at Lord Howe in 1882 as well as by Captain Cook and astronomer Charles Green in Tahiti in 1769.

The Australian National Maritime Museum’s land crew flew to the island with satellite technology to live-stream the 6 June transit to their website with a reciprocal link to the Sydney Observatory.

Dr Cook said sailing into the south Pacific in 1769 was a journey to the unknown.

“The story of the Endeavour and the transit of Venus is one of the great stories from Europe in the 18th century,” he said.

“It’s something which combines swashbuckling adventure and great maritime skill to sail this little boat across the world into unknown seas in the interest of exploring not only the heavens but also the earth.”

King George III provided a £4,000 grant for the Royal Society’s expedition as transit observations would improve navigational
knowledge and determine the size of the universe.

The 2012 expedition had a 50 percent chance of success: Cook’s Endeavour had perfect weather in 1769, but the 1882 transit
observation at Lord Howe Island was clouded out.

The 2012 transit observation was in doubt.

Due to gales on Monday 4 June, the maritime museum’s land crew could not fly to Lord Howe Island, while the historian and astronomer could not be transferred from Endeavour to the island.

Strong winds ripped the marquee erected at the old meteorological station and telescopes were kept inside for safety until viewing could begin late morning.

Viewing options included solar glasses, the school’s solarscope, and two telescopes – one fitted with a sun funnel to permit group viewing and the other beaming images by satellite to Sydney.

Astronomer Carlos Bacigalupo said changes in the light spectrum as Venus passes in front of the sun provided information about Venus’
atmosphere and helped the search for planets outside our solar system. “To find life on another planet would be a paradigm shift for humankind,” he said.

While the sea remained too rough for Endeavour voyage crew to disembark for the transit of Venus, tourists and island residents enjoyed this cosmic event.

Gladstone Maritime Museum webmaster Graham Humphreys booked his flight to Lord Howe Island six months ago to view the rare combination of the Endeavour and Venus transiting the sun.

When asked the key pleasure of the day, he said: “The improvement in the weather!”

Dr Peter Reed and son Bradley viewed Venus’ exit from the sun by alternating between the solarscope (which reflects and magnifies the
image) and solar glasses (which permit a safe direct view of the sun).

Bradley summed up the experience: “It looked really cool!”