A date with history as Venus transits the sun 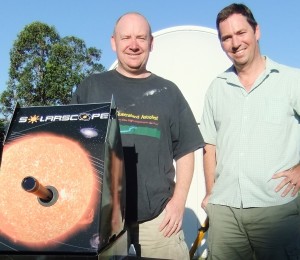 It’s a date! On Wednesday 6 June 2012, the silhouette of Venus will transit across the sun for the last time this century.

School children around Australia will be citizen scientists for a day as they repeat the same scientific experiment conducted by Captain Cook and astronomer Charles Green that led to the discovery of Australia.

As the Transit of Venus is similar to a solar eclipse, it needs to be viewed safely.

The surveying and spatial sciences industry in association with Astronomical Association of Queensland (AAQ) have provided solarscopes to 400 schools around Australia.

These project a magnified image of the sun onto a screen.

Fellow member Jonathon Bradshaw said Australia was discovered after Captain Cook completed his mission to observe the 1769 Transit of Venus from Tahiti.

Since the phenomenon was first predicted for 1631 by Johannes Kepler, only six Transits of Venus have been observed.

Although Venus and Earth are aligned to pass every 584 days, we see a Transit of Venus twice in a century, eight years apart, because Venus’s orbit is usually above or below the sun in the sky.

A record of the times that Venus makes contact with the inner and outer edges of the sun is used to calculate one Astronomical Unit (AU), the distance from earth to the sun.

“The Astronomical Unit has been significant in the history of mankind as one AU allowed us to calculate the size of the solar system,” Mr Bradshaw said.

Head of the Astrophysics group at The University of Queensland, Professor Michael Drinkwater, said scientists were searching for planets outside our solar system.

“Planetary transits, like that of Venus, across distant stars are the main method used to search for these exoplanets,” he said.

AAQ and UQ’s Astrophysics Club have invited Brisbane residents to a live broadcast from the University of Queensland’s St Lucia campus.

Specially outfitted telescopes will provide a live feed to www.transitofvenus.com.au/HOME.html and a reciprocal link to UQ’s website at the School of Mathematics and Physics.

To be a citizen scientist download the free Transit of Venus app designed by Astronomers without Borders or Geotag and tweet your observations. (Instructions are available at http://transit2012.org)