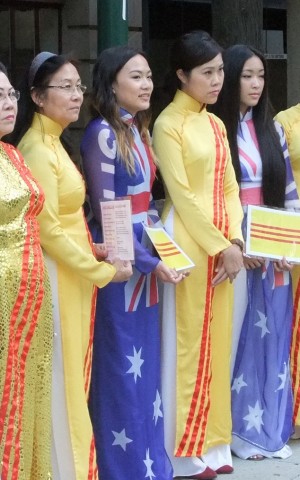 The Brisbane Vietnamese community and their Australian allies marked “the day of mourning” – the anniversary of the fall of Saigon which ended the Vietnamese war on 30th April, 1975.

Before the twilight service in Anzac Square yesterday, a grieving man thumped the memorial wall of pictures depicting stages of the Vietnam War, while another, with shoes removed, prayed for peace.

The service was held in both English and Vietnamese. A Vietnamese guard of honour was mounted within the Shrine of Remembrance and before the Vietnam War memorial statue.

A group of young women in Vietnamese national dress (pictured) stood near the memorial. Some were styled as the Australian flag; others were styled in yellow with three red stripes, the Freedom Flag of South Vietnam.

The ceremony was hosted by the Queensland Chapter of the Vietnamese Community Association of Australia and included Christian blessings by Reverend Janice Hughes and Buddhist blessings by The Venerable Thích Thiện Hữu.

After wreaths were laid at the foot of the Vietnam War memorial statue, the last post was sounded, and a minute’s silence observed for the fallen. 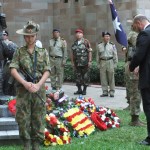 The service concluded with both national anthems and the dismount of the Vietnamese guard of honour.

A small plaque affixed to the Shrine of Remembrance in honour of those who fought in the Vietnam War quotes Euripides: “What greater grief than the loss of one’s native land.” Lest we forget.