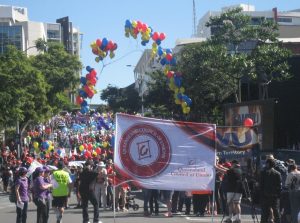 Queensland opposition leader Anastacia Palasczuk told marchers she would return the party to its traditional values.

Ms Palasczuk apologized for privatisation under the Labor Government and promised she would “bring back the old values”.

She received some heckling from listeners, but overall if members of Queensland’s trade union movement were upset over Labor’s sound drubbing at the polls in March, they weren’t showing it today.

Colourful union pride flowed through the streets of Brisbane as about 30,000 marchers turned out in their colours, chanting: “We’re workers. We’re united. We will never be defeated.”

A moment of drama came when members of the Aboriginal tent embassy protested on a corner of the parade circuit that organisers had not let them take part.

But after some negotiations they were allowed to join the procession.

The participants marched to the sound of music played by bands marching alongside them.

The Builder Labourers Federation had young cheerleaders with their pompoms dancing along to pumped up music.

The parade finished at the RNA show grounds where hundreds of trade union members gathered.

The Queensland secretary for Shop, Distributive and Allied Employee Association Chris Ketter said: “I think a reasonable amount of (people) turned out today.”