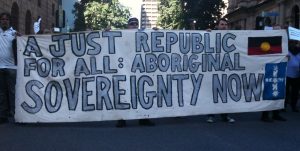 Sovereign tent embassy protesters brought CBD traffic to a standstill today when they marched from Parliament to Roma Street watchhouse after their eviction from Musgrave Park.

The Aboriginal elders and supporters took over the streets, causing chaos to lunchtime traffic.

Around 200 people walked the route yelling slogans and waving signs.

“One two three, sovereignty, that’s how easy it can be,” they chanted.

They surrounded the watchhouse demanding the release of arrested protesters.

Dozens of police surrounded the building preventing protesters getting inside.

Sovereign tent embassy spokesperson Wayne Wharton, one of 31 arrested this morning, was released to cheers of joy and celebration from fellow protesters.

Organiser and Aboriginal leader Sam Watson said the protesters would not leave until all their brothers and sisters were freed.

The protesters said they planned to start the tent embassy in the same place. They said they were outraged to see the Aboriginal flag fly outside Queensland Parliament and demanded that it be taken down.

Protestor Bradley James joined the marchers after he saw the eviction at the Sovereign Embassy.

“The state is using massive amounts of public resource to move on people that were peacefully assembled in a park practising their spiritual sovereignty and cultural rights,” he said.

“I thought it was excessive abuse of police power in this state under (Premier) Newman who obviously is only in power for his second day but seems to be wanting to flex his muscles a bit.”

“Officers were faced with a very difficult situation but regardless carried out their duties thoroughly with sensitivity and fairness,” Mr Dempsey said.