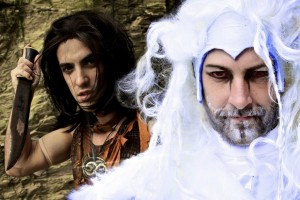 
Popular 1984 movie The Neverending Story comes to life in this stage adaption.

Director Tim O’Connor succeeds in asking the audience to use similar levels of imagination to the book on which the tale is based. O’Connor’s own imagination has flowered into a clear and compact concept that fits — magically — into the Cremorne Theatre.

Fantasia’s ruler, the Childlike Empress, summons two heroes to her aid: Bastian Balthazar Bux, a lonely bullied (human) boy, steals her book – the gateway to Fantasia. Bastian reads that Fantasia will be consumed by The Nothing (the death of human imagination) unless Atreyu can bring Bastian to the empress to give her a new name.

Josh McIntosh designed puppetry for the most fantastical creatures, spectacular costumes, and a living proscenium arch. The elegant set allows seamless scene changes by use of the full height and depth of the stage to provide a separate niche for each location from Fantasia and Bastian’s world. And I believe the flight of the luck dragon!

The landscape — real and imagined — comes alive with Jason Glenwright’s lighting design, and Maitlohn Drew’s adaption of the iconic film score for a live string quartet. The re-orchestrated music adds a depth and immediacy that use of excerpted recordings could never match.

It’s an action-packed script that does not allow for character or emotional development, and is eased along by short narratives from the chorus who needed time to vocally warm up. They also provide assistance with the larger puppets (Morla and the Rockchewer).

Erika Naddei plays the small, but pivotal role of the Childlike Empress. Her emotive performance as the beating heart of Fantasia draws loyalty from Bastian and Atreyu.

David Lawrence convinces as Bastian, the bullied bookworm, who yearns to release his own imagination.

Dan Venz has the physical presence and strength of purpose to carry the show as the young warrior Atreyu. It is not an easy journey through the marshes where he loses his steed, Artax (Dan Crestani), to the murderous lair of the spider, Ygramul (Casey McCollow), where he meets the luck dragon, Falkor (Anthony Standish).

Anthony Standish matches Dan Venz in presence, but, at times, is more arrogant than the Falkor I loved in the movie, and the occasional licking of Atreyu’s hand was more icky than affectionate. (The audience around me squirmed.)

The prize for outrageous comic relief goes to the gnomes, Dan Crestani and Cameron Whitten.

The wolf Gmork (Ron Kelly) is the agent of The Nothing sent to stop Atreyu. The athletic fight between them, choreographed by Niki-J Price, draws gasps of admiration from the audience.

Michael Ende said: “Every real story is a neverending story.” This production will never end in the imaginations of those who see it.