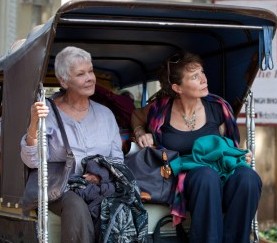 Life is like a big story book, everything will be all right in the end, and so if it’s not all right, it is not yet the end.

From the director of Shakespeare in Love comes a movie that can captivate audience’s attention which shows about life, after life.

This film has a wonderful cast, a plot which goes from a start to a new beginning, filmed in a very beautiful place and music which flows gracefully along with the story.

This is one film that is worth the ticket price, offering a great experience in the cinema.

It is based on a book by Deborah Moggach, These Foolish Things, which tells a story of seven British retirees who travel to India to get away from their daily lives full of crisis.

In the beginning we see a cast of characters who are in their routine lives filled with crisis who escape from it all by heading to India.

Evelyn, played by Judi Dench, is a widow forced to sell her home to pay off her husband’s debt.
Douglas and Jean (Bill Nighy and Penelope Wilton) have invested all of their life savings into their daughter’s internet business nd struggle to afford a home, besides a retirement home that has railings around the wall and a panic button.

Graham (Tom Wilkson), waiting for the right day to retire as a high court judge, has decided to go back to India where he grew up and to finish personal business over there.

Norman (played by Ronald Pickup) has a desire to meet young women in his old age and thinks of himself as a great lover.

Madge (Celia Imrie) is an adventurous old woman who gets tired of her daughter and son-in-laws to keep her home to look after their children.

To complete the cast we get Muriel, a racist, interfering old ex-house keeper who goes to India to get her hip replaced, played by Maggie Smith.

All of there paths are intertwined to cross as they all head to the Best Exotic Hotel for the elderly and beautiful run by a very half-glass full hotel manager Sunny (Dev Patel – Slumdog Millionaire).

The film takes their journeys to the hotel and India and helps them move forward in their lives, to see that when one door closes another one will open.

The mixture of humour, drama, thrill of seeking an adventure can only be captured in this fun film where east meets west.

The film takes them all on a different journey of self-discovery, from heartbreaks to finally accepting who they are and awakening from what their previous lives were.

The hotel in which the retirees stayed at was technically under-construction where these elderly Englishmen are lured in a bid to make the awareness of the hotel and make growth in the business.

Some of the best moments of this film are the humorous one-liners by Maggie Smith, including the main point of the story – that everything will be all right in the end, and if it’s not all right, then it’s not the end.

Photo: Judi Dench as Evelyn and Celia Imrie as Madge arrive at the exotic hotel.