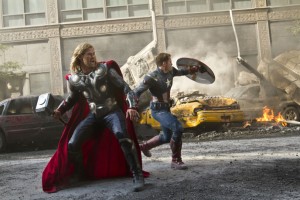 Nick Fury (Samuel L Jackson) leads a secret government agency called S.H.I.E.L.D. When Loki (Tom Hiddleston) a demigod from another realm arrives on Earth to retrieve a cosmic energy cube, (a macguffin) hellbent on ruling the planet with it and his alien army, Fury must assemble the finest super heroes Earth can muster to repel the intergalactic threat.

Yes, the plot may sound silly and far fetched but we are dealing with a fantastical Earth where extraordinary beings exist, so some suspension of belief is required but luckily Whedon grounds the film with more earthly themes such as friendship, loyalty and family.

Whedon, who may be more familiar to audiences with his television shows Buffy and Firefly does a remarkable job in bringing together all these larger than life characters in a fun filled popcorn adventure that contains the right balance of action, humour and drama. Knowledge of the previous films especially Thor will help with back story but the film does well to stand on its own merits.

As any film lecturer will tell you drama is conflict, and here we get it in abundance. The Avengers team by all rights should not be together. They fight and bicker over their divergent views on their roles as heroes, but when the moment comes to put aside their quarrels and confront their common foe they stand together as one. In other words they are a family. All be it a dysfunctional one. Anybody familiar with Whedon’s body of work will know that dysfunctional families are his forte.

Whedon is ably supported by a fine ensemble cast that are clearly having a great time with an engaging, witty script. Most of the actors reprise their titular roles from previous films most notably Robert Downey Jr, back in fine form as the wry, sarcastic Tony Stark/Iron Man who clashes with ideologically earnest Steve Rogers/Captain America (Chris Evans). His fun exchanges with all the characters provides a lot of the films comic moments.

Stark: “No offence but I don’t play well with others.”
Rogers: “Big man, in a suit of armour…take that away, what are you?”
Stark: Uh… genius, billionaire, playboy, philanthropist..”

Thor (Chris Hemsworth) is his usual arrogant demigod self but feels a personal responsibility to halt his brother Loki’s plans. Rounding out the super hero quartet is Bruce Banner (Mark Ruffalo) who when angry morphs, like Dr Jekkyl to Mr Hyde, to his larger green alter-ego the Hulk. Ruffalo, the third actor to portray Bruce Banner, brings a self-effacing sensitivity to the character. Although the Hulk is a CGI creation, Ruffalo acts out the role through motion capture. This makes the Hulk a more rounded character and it is by far the most impressive cinematic representation of the Hulk we have seen.

The remaining Avengers team is made up by non-super powered, but extremely gifted humans, including the stoic Hawkeye (wonderfully portrayed by Jeremy Renner) briefly seen in Thor and what Whedon film would be complete without his trademark arse-kicking female character? The lucky recipient of Whedon’s female attention is Black Widow (Scarlett Johansson) who returns with a more fleshed out back story than in Iron Man 2 and as the lone female character in the team is more than a match for her testosterone-filled comrades. The other female character in the film is Agent Maria Hill (Cobie Smulders) who has a few heroic moments but otherwise is resigned to following orders.

Agent Phil Coulson (Clark Gregg), who has been a continuous thread throughout all the films, comes to represent the fans here (his idolisation of Captain America is a highlight) as he passionately espouses why the world needs the Avengers and also why Captain America is the man to lead them. Nick Fury is given more screen time then previous films which allows Jackson to imbue the character with the cool, cocky, confident demeanour he does so naturally.

A good versus evil story is only as good as its chief villain and Tom Hiddleston brings a charming menace to Loki. Hiddleston and Whedon aren’t afraid to give Loki a few vulnerable moments to create a more humane character. (His encounter with the Hulk had the audience in raptures)

The visuals are splendid with some elaborate action set pieces (memorably a battle aboard an airborne carrier, pulled off with grandeur) which are well choreographed. The 3D conversion doesn’t impair the film as it has done with others but enhances the action sequences. The film is expertly shot by Seamus McGarvey (Atonement) who switches from sweeping tracking shots to digital zooms seamlessly.

Whedon, a self-confessed comic book geek, handles the delicate balance of allowing each of these characters to have their moment to shine without short changing any of them. Not an easy task when you consider that Iron Man, Captain America, Hulk and Thor were all previous leading characters in their own films.

A feature of Whedon’s work is to undercut dramatic tension with comedy and with his uncanny knack for dialogue, he effortlessly brings this into play here without ever cheapening the stakes. Each of the characters are flawed and question their right to be part of this elite team which allows them to have interesting dramatic arcs through the entire film.

The first salvo has been fired in the comic book to film adaptations for 2012 so both The Amazing Spiderman and The Dark Knight Rises will have to be at their best to claim end of year honours.

One Response to “Review: The Avengers”