Review: Once Upon A Time 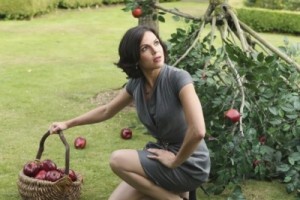 Everyone deserves a happy ending, don’t they? From the producers and writers of LOST comes a fairytale ending, but not for everyone!

This series has put its own delicious spin on the once beloved fairytales we grew up reading and explores each character in two different worlds.

The evil queen’s curse is the main reason of the story. She wanted her “happy ever after” and she got it, by freezing the fairytale world and bringing its characters into the modern day world without any recollection of their pasts (apart from the evil queen).

“I will destroy you if it’s the last thing I do,” said the Evil Queen to Snow White at her wedding day, telling everyone that they would all pay.

The series will explore in each episode the origins of all the characters as we know them and see them in the modern-day town Storybrooke.

We see many interesting characters come to life before our eyes in each new episode. The only one who is from the story book land but grew up in the modern day is our hero and the one who can break the Evil Queen’s curse, or so Rumplestiltskin says.

Jennifer Morrison, who plays Emma Swan is our hero of this series. She is a 28-year-old bail bonds collector who has been alone since she was abandoned by her parents when she was a baby. She got pregnant herself when younger and gave her son away for adoption.

Emma Swan’s son Henry, played by Jared Gilmore, was adopted by none other than the evil queen or as everyone calls her in Storybrooke, Regina.

Henry may have a vivid imagination for a 10-year-old, but in his eyes he knows that everyone in Storybrooke is a fairytale character and that Emma Swan, the daughter of Prince Charming and Snow White, will break the Evil Queen’s curse.

The Evil Queen/Regina is played by Lana Parrila (pictured picking up her delicious red apples in the modern day town of Storybrooke) and she remembers everything — after all this is her happy ending. Parrila plays the role deviously and intelligently.

As Rumplestiltskin says “Every spell has a price”, and in this case, the only way to break the Evil Queen’s curse (spell) is Emma Swan (the price). Rumplestiltskin/Mr Gold is played by Robert Carlyle.

The other cast include Ginnifer Goodwin as Snow White/ Sister Mary Margaret, Joshua Dallas as Prince Charming/ James, Jamie Dornan as Huntsman /Sheriff Graham, Raphael Sbarge as Jimney Cricket/Archie and Eion Bailey as Pinocchio/August W. Booth. The acting is of a high standard throughout.

At the end of each episode you will see something magical happen. Without going into too much detail, in the first episode we see a clock, which never has worked in this town, suddenly begins to work again — these are signs that the queen’s curse is being lifted. One person does remember who they are earlier in the season.

As in the series LOST, there is black smoke which starts the curse, which will play a part of the story/series, like the clock, until the end of the season.

This is one of the shows of the year — and with an overall rating of 4.5 out 5 delicious red apples should not be missed.

One Response to “Review: Once Upon A Time”