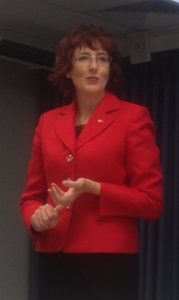 In a talk to Jschool Journalism College students at Parliament House, Ms Simpson (pictured) stressed the importance of a well-educated media presence in politics.

“It is absolutely critical that we have an educated media,” Ms Simpson said. She also said it was important to have a free press.

Ms Simpson, who was a journalist before entering politics, expressed concern that the public were not necessarily exposed to the best news and media.

“People are receiving their information through so many fractured sources,” Ms Simpson said.

When asked why she entered into politics she said: “I always thought I’d be a journalist.”

Ms Simpson had expected to return to journalism after what she described as a creative break, which involved some singing and song writing.

But feeling challenged to do something about issues she saw in the community, she ran for parliament and was elected, serving for many years on the Opposition front bench.

Appointed the first-ever female speaker to Queensland’s Parliament after the Liberal National Party’s resounding win in this year’s election, she is happy with her appointment despite the different role.

“I’m genuinely, genuinely delighted with it,” she said.

Ms Simpson said she would not attend party meetings but was still an LNP member and would continue to represent her Maroochydore electorate.

“I still go to ministers and ask for things,” she said.

She did not consider her political views would be a problem in chairing parliamentary meetings. She said if people are aware of their bias they can be objective in their decision-making, which she also considered invaluable advice for anyone studying journalism.

Ms Simpson said she would ensure the rules of parliament were applied fairly, and she would like all members to feel comfortable when raising contentious issues.

She feels the speaker’s role in parliament is “an art rather than a science”.

As a woman she felt she had to work harder to prove herself when she entered politics.

Asked if her journalistic experience has helped her political career, she replied “Absolutely.”