Prepare for a wet winter 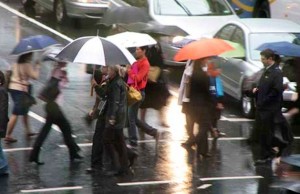 Brisbane should brace itself for a wetter and colder winter than last year in the wake of April’s record-breaking rain, according to the Bureau of Meteorology.

Despite the devastating floods that rocked the city last January, more rain fell in Brisbane in the first four months of this year than in 2011.

Brisbane had almost 50 percent more rain in April than for the same time last year. It recorded 149mm for the month which was almost triple the April average.

The Bureau said the increase in rainfall was partly related to warmer than normal waters in the Indian Ocean.

The city of Logan experienced its coldest April day on record when the maximum temperature reached only 20°C on the 28th.

One Response to “Prepare for a wet winter”