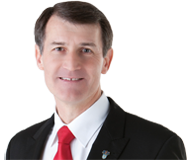 The next four years of Brisbane will be about economic growth and prosperity, according to newly re-elected lord mayor Graham Quirk.

Cr Quirk (pictured) told this week’s Brisbane City Council meeting he was committed to his election promises and had a four-year-plan to make this happen.

“They are visionary plans, which aren’t achieved overnight, but we will work this four-year term to achieve our vision,” Cr Quirk said.

The plan includes easing traffic congestion with the Legacy Way project due for completion by 2015.

“We will push forward with a greener city and spread word of being an inclusive city which is accessible to all,” Cr Quirk said.

A total of $4 million will be spent to fix and make improvements to 80 intersections around Brisbane.

“Two new citycat terminals will be created, one upgrade at Bulimba and one new terminal at Park Road Milton,” Cr Quirk said.

Tourists will be welcomed with free inner-city tours.

“This will create another part of the friendly Brisbane experience that we want to portray to visitors to our city,” Cr Quirk said.

The Lord Mayor said an announcement would be made in a few weeks on how much had been raised through the voluntary rates contribution for the City Hall restoration.

Re-opening of the iconic building begins in December 2012 and it is due to be fully opened by February 2013.